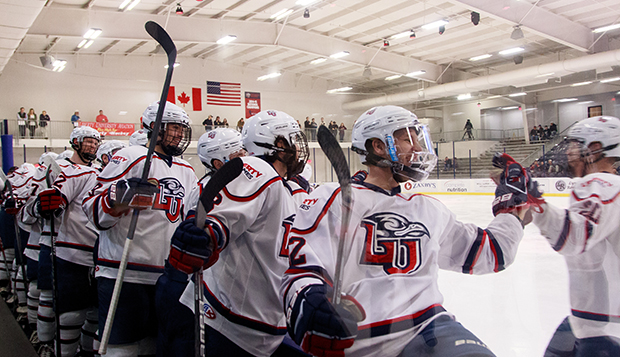 Liberty University's ACHA Division I men's hockey team's home sweep of fourth-ranked Davenport last weekend bumped the Flames up two spots to No. 18 in this week's ACHA DI computer rankings, buoying their hopes of qualifying for the ACHA Division I National Championships for the ninth time in 11 seasons.

"Stringing two games like that back-to-back is a real positive for us moving forward, not only for this year, but for years to come with these guys," Flames Head Coach Kirk Handy said of his team, which features 12 freshmen and nine sophomores on its 24-man roster.

He liked the sense of urgency he saw from his players against the Panthers, with the sweep allowing Liberty to wrestle the fifth and final Blue & Gray Cup away from Davenport for the first time since 2013-14. "We're fighting for our life to get into nationals," Handy said, noting that the top 20 teams in the final ACHA DI poll — including six autobids awarded to conference tournament champions — advance to the March 9-14 ACHA DI National Championships in Columbus, Ohio. "We played a desperate style of hockey where our guys bought in. They were all in, which was nice to see."

A positive sign of leadership developing within the Flames' young squad occurred during Saturday's second game against Davenport.

"At a media timeout, the coaches were sitting there talking, about to say something to the team, and (sophomore defenseman) Basil Reynolds stepped up and started talking about our retreat (with Warrior Fellowship in August)," Handy said. "He said, ‘If you think this is hard, remember our retreat and all the things we did together as a team to get us to this point,' and I was thinking exactly what he was saying. That's awesome to see that our guys are stepping up and taking ownership of the situation."

Handy hopes that attitude and relentless pursuit carries over into this weekend's series against Eastern States Collegiate Hockey League (ESCHL) rival Rutgers, back at the LaHaye Ice Center.

"We have two big games this weekend after a big week of practice again," Handy said. "With our young team, it gives guys the confidence that if they prepare well, if they work hard, we're going to be successful."

Liberty scouting report: The Flames improved to 13-5 at home this season with their first sweep of Davenport in three years. Freshman defenseman Matt Cruickshank's two goals and an assist in two games against the Panthers moved him into a three-way tie for fifth on Liberty's list of scoring leaders with 22 points. He is one of three defensemen who have made major offensive contributions for the Flames, along with sophomore second-leading scorer Zane Schartz (14G, 20A) and freshman Garrett Nelson (9G, 13A).

Junior defenseman Grant Garvin's two putback scores in the second game pushed him over the 100-point scoring mark for his career as he is the team's leader for the second-straight season with 19 goals (including four game-winners) and 23 assists for 42 points. He ranks fourth in the ESCHL and 21st among ACHA DI scoring leaders.

In goal, senior Matt Pinel posted his third shutout of the season in the second game against the Panthers, raising his record to 11-9 and his save percentage to 89.8 while lowering his goals-against average to 3.29. He is backed up by junior Josh Halpenny (2-1, 3.75 GAA, 89.8 SP).

Rutgers scouting report: Battling with the Flames for third place in the ESCHL standings, the Ice Knights can move in front of Liberty with a sweep this weekend. Rutgers' offense is sparked by Brian Gnad (17G, 20A) and Kevin Fitch (13G, 12A). Both have netted two game-winning goals, one fewer than CJ Maksut who has three despite only scoring seven times. Fitch leads the way with five power-play scores. In goal, Christopher Marsillo has spent all but 48 minutes between the pipes, going 13-13 with two shutouts, a 3.50 GAA and 91.1 SP.

All-time series: The Flames have split two games at Rutgers this season, winning a Jan. 29 rematch with the Ice Knights, 7-3, after surrendering a 3-0 lead in a 5-3 setback on Dec. 4. Liberty now leads the series, 5-1.

Coaches: Handy is in his 17th season as Liberty's head coach with an overall record of 368-165-25. Joe Dickson is 2-3 in his first two weeks as Rutgers' head coach after replacing Martin Bernstein, who went 22-23-2 in a season and a half of leading the Ice Knights.