Men's lacrosse debuts at No. 20 in MCLA DI Preseason poll 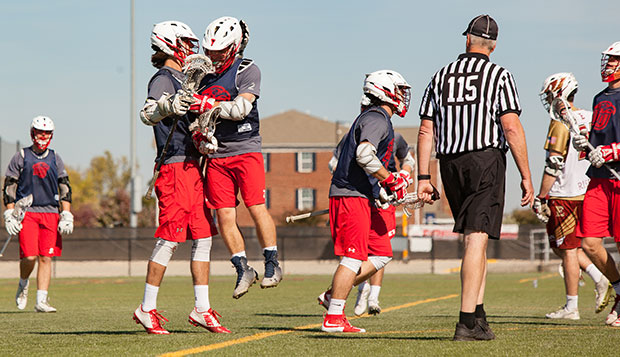 Sophomore attack Sam Gregory (2) celebrates a goal during an Oct. 29 scrimmage against Elon at the Liberty Lacrosse Fields. (Photo by Caroline Cummings)

"We don't put too much weight on it because we haven't played any games yet," Flames Head Coach Kyle McQuillan said.

Liberty opens its regular season a week from Saturday, meeting SouthEastern Lacrosse Conference (SELC) foe East Carolina for the first time at the Division I level, starting at 3 p.m. at the Liberty Lacrosse Fields.

"There's a lot of representation from the SELC, which is great," McQuillan said. "It's not only a struggle of Liberty's but also the SELC, getting the respect from all of the other conferences in the MCLA. Four (in the top 25) is as many teams as we've ever had. Hopefully, we'll be able to continue to raise the flag for the SELC and prove that we're not only the largest conference in the country, but the most competitive as well."

McQuillan added that Liberty has made great strides during its short time in the league, consistently being ranked in the top 25 and remaining competitive with the best teams in the country.

"We want to continue to move this conference forward like Virginia Tech and Georgia Tech have with their play at the national level," he said.

The surest way to qualify for nationals is to be one of 10 conference tournament champions, something Liberty has yet to achieve in its first three seasons since winning the 2013 SELC Division II tournament and moving up to the DI level in 2014. There are six at-large national bids awarded, but the SELC has only had two teams go to the MCLA nationals once in the past three years.

"Realistically, to secure a spot at nationals, you have to be a top-10 team," McQuillan said. "We've always been right on the cusp of making nationals, fluctuating between the No. 15 and No. 25 spots. So, we've got some work to get up into the top 10. Our schedule this season and the teams we're playing will give us that opportunity and we're looking forward to it."

Of the SELC's ranked teams, the Flames have Florida State (March 31 at home) and Virginia Tech (April 15 in Blacksburg, Va.) on their schedule.

"We'll have an opportunity to take matters into our own hands when we play those teams," McQuillan said. "Then Georgia Tech is a team that if we want to win the SELC championship — and that's always the goal — we will meet in the playoffs."

"Although we're very focused on competing against the SELC, we're also committed to playing some of the best teams on the national level," McQuillan said. "We want to expose ourselves to some of the elite programs outside the SELC as well."