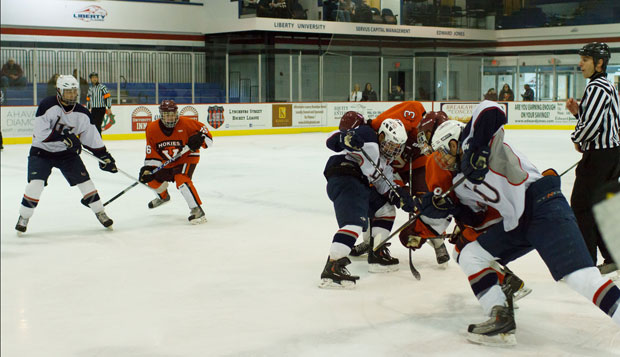 After falling to the Hokies on the road 5-3 Friday night, Liberty University's Division II men's hockey team flipped the script Saturday, topping Virginia Tech at home by the same margin.

Nick Devine went the distance for the Flames in goal, making 32 saves on 35 attempts and proving to be the difference in the matchup, which was an intense defensive struggle both ways.

"Our team really picked up the level of intensity, and level of effort from last night's game. Nick Devine played great in net. He did everything we needed him to do," said Josh Tucker, Flames assistant coach.

Both teams did not see many opportunities early in the first period, as both defenses came out aggressive. Liberty managed to push one through nine minutes into the period as Brad Docksteader scored on a feed from Brent Boschman as the Flames crowded the net. Later in the period, Devine staved off a strong Hokies attack on a power play, blocking back-to-back-to-back shots to keep Liberty's 1-0 advantage as time expired.

The Flames had a scare early in the second period as a Virginia Tech player kicked one into the goal, resulting in a face-off after the presumed score was vetoed by the officials. Five minutes into the frame, however, the Hokies tied the score up at one thanks to a goal by Jake Hubert.

As if energized by the opposition scoring, the Flames came back firing on all cylinders. The aggressive attack led to a Liberty goal at 9:44. DJ Dinnison took a rebound up the middle and fired it home, restoring the Flames' one-goal advantage at 2-1. Kyle Davis and Peter Kazmierczak were each tallied an assist on the play.

As time ticked away in the second period, Liberty was playing too much defense, and nearly let another one slip. But solid play from Devine kept the Hokies at bay going into the third period.

Liberty turned it up in the final frame with a score four minutes in. Caleb Allison found the back of the net, finishing a play assted by Dinnison and Josh King. Boschman broke the game wide open on a breakaway with under five to play, banking in a goal off the stick-side post.

Penalties down the stretch gave Tech a chance to get back in it. With a little over a minute left in the third period the Hokies pulled their goalie on a power play for a two-man advantage. The move paid off as Zack Walz scored with exactly one minute remaining, making the score 4-2 Liberty. Walz slapped one home 15 seconds later to narrow the margin to one, with Tech still on the power play. As time ticked down, Allison scored his second of the night on an empty net, sealing the win for the Flames.