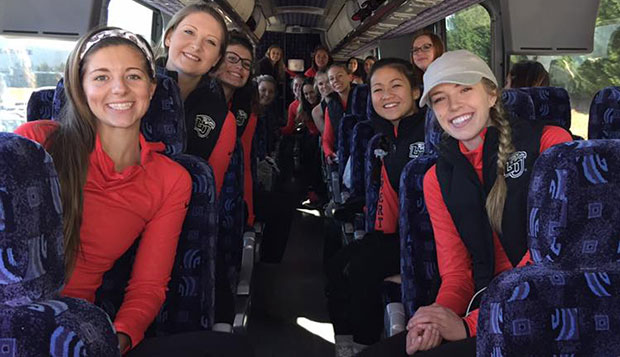 In the Pre-Juvenile division, senior Leah Cowan placed third out of seven skaters in her group and senior Rebekah Hicks placed fifth out of eight in her group despite battling an illness.

Then, in the final event of the day, sophomore Intermediate free skaters Megan Gonzalez and Sibylle Harter placed sixth out of 11 and 12 skaters in their respective groups.

On Sunday morning, Lady Flames freshmen Jordan Robinson and Jill Holste placed second out of six and seven skaters in their groups in the Novice free skate.

Scherreik finished third out of 11 competitors in her Junior free skate while junior Cheyenne Peterson pulled a muscle that relegated her to 10th place out of 11 skaters in her group.

Liberty's other Senior-level skater, freshman Chelsea Henry, was hampered by a knee injury that prevented her from skating to her maximum ability and she placed ninth in her group.

Liberty will host the next Eastern Sectional Intercollegiate competition March 4-5 at the LaHaye Ice Center, when the team plans to have 33 starts out of a maximum 35.