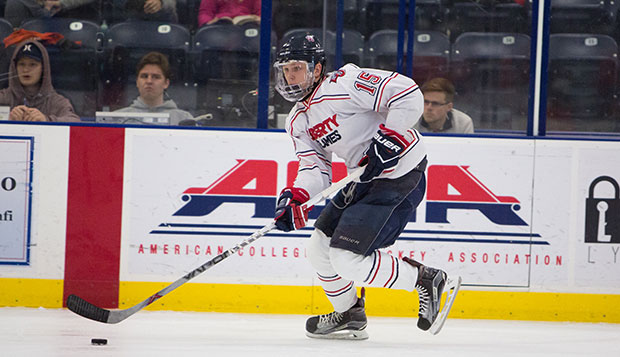 Liberty University's ACHA Division II men's hockey team — coming off a 10-game homestand in which it finished 8-1-1 — showed it can win just as decisively on the road this weekend in New Jersey and Pennsylvania.

On its current nine-game winning streak dating back to Dec. 2, Liberty has now outscored opponents by a whopping 87-11 count.

Paul Lamoureux scored twice against Rider in a six-goal second period that broke open a 3-0 lead after the first. Fellow junior forward Robert Ward netted his second goal of the game, shorthanded, to cap the scoring in the third. Senior forward Devon Docksteader also scored twice against Rider and senior linemate Ben Freymond netted one goal Saturday night and two on Sunday afternoon.

Docksteader, Freymond, Lamoureux, and graduate forward Tyson Street got things going with second-period goals for the Flames against Millersville before goals by Lamoureux, Freymond, and Ward were complemented by scores by freshman forward Victor Blomberg and senior defenseman Roger Roulette in the third period of the 11-1 triumph.

The Flames will conclude their regular season with a single game against Virginia Tech on Saturday at 2 p.m. at the Roanoke Civic Center before traveling to the University of Delaware for MACH tournament play on Feb. 17-19 and hosting the South Regional championships Feb. 24-26 at the LaHaye Ice Center.

Currently ranked second in the South Region, the Flames may not have to play in that tournament, as they will receive an automatic bid to the March 15-19 ACHA DII National Championships in Columbus, Ohio, if they can stay at No. 2, or rise above top-ranked, defending national champion Florida Gulf Coast.