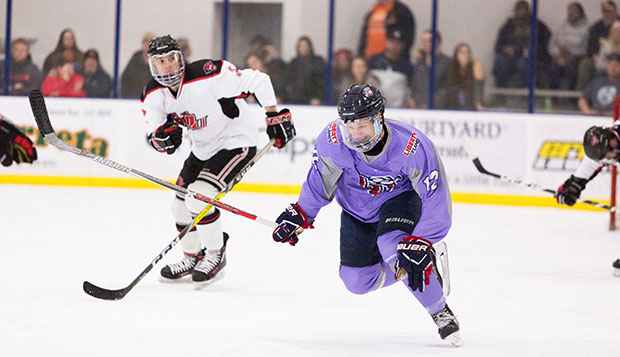 The chill in the air outside the LaHaye Ice Center, and the stakes of Saturday night's rematch between the 20th-ranked Liberty University ACHA Division I men's hockey team and No. 4 Davenport, produced playoff-level intensity inside the arena for the deciding game of the fifth-annual Blue & Gray Cup.

The Flames scored three more power-play goals — including the 100th point in junior center Grant Garvin's career — and benefited from the third shutout of the season by senior goalie Matt Pinel in a 5-0 triumph that clinched their second Cup and first since the 2013-14 season.

"The trophy is great to have, but we aren't satisfied yet," Liberty Head Coach Kirk Handy said. "We're fighting for our life to get into (the ACHA Division I) National (Championships) and we have to put our nose to the grindstone to get there. We played a desperate style of hockey tonight where our guys bought in. We think we can take our game to even another level and keep pushing them forward."

The Blue & Gray Cup series dates to 2012 and hearkens back to Civil War era when regiments from Lynchburg, Va., clashed with those from Michigan on the battlefield. Liberty (21-12) and Davenport (21-6-1) have had their share of skirmishes on the ice over the years, including in the late going of Friday's opener when two Panthers defensemen were ejected.

In Saturday's rematch, the Flames struck first at the 13:12 mark of the first period when sophomore forward Owen Harris took the puck from freshman forward Jamie Crane and skated it down the left wing before cutting back and backhanding it through the five-hole of Davenport goalie Jason Rhynold.

Freshman defenseman Matt Cruickshank, who netted two goals in the Liberty's 5-3 win over the Panthers on Friday night, nearly doubled the lead with a quick shot from the right slot moments later. Sophomore defenseman Zane Schartz also had a near miss of a wide-open wrist shot from deep in the left circle, lifting the puck just high of the left corner before Rhynold gloved and kick saved shots from the point by freshman forward Drew Crilly and Cruickshank, respectively, in the closing minutes of the first period.

"I really liked our game tonight," Handy said after the Flames outshot the Panthers, 39-27. "We were winning faceoffs, we were shooting the puck tonight, which are two areas of our game that we struggled in (Friday) night."

After a sluggish start to the second period, Liberty kept the pressure on the Panthers as freshman forward Cody Clarke lifted a shot from the left circle off the crossbar and Harris nearly slipped the puck through the five hole again on a quick counterattack off a steal inside the blue line.

Garvin was then tripped up in the right corner, putting the Flames on the power play with 7:17 left and Cruickshank had two more slap shots from the point glove saved by Rhynold before Liberty capitalized with 16 seconds left on the man advantage. Schartz sent a crossing pass to senior defenseman Ben Hughes whose shot from the top of the right circle was put back top shelf by Garvin from deep in the right crease. That extended the Flames' lead to 2-0 with 5:33 left in the period and they went back on the power play after Harris was upended in the slot.

Seconds after that power play expired, freshman defenseman Jacob Fricks received a pass from Cruickshank at the top of the right circle and sent an entry pass to sophomore forward Colt Steele who one-timed his finish from the left crease into the top right corner of the net, increasing the advantage to 3-0.

Liberty nearly struck again in the closing minute when Garvin fed a pass through the slot to freshman forward Quinn Ryan, but his shot from the left circle clanged off the top right corner of the cage.

Granted a five-on-three power play after Steele was rammed into the boards head-first, the Flames capitalized to pad their lead to 4-0 with 6:46 left in regulation on another putback by Garvin in the same spot, this time off a shot by Schartz from the top of the right circle.

"Garvin's been one of our best players for the past four games," Handy said. "He's skating hard, he's working hard. He's become a great team player and in the last four games, we've really seen his game elevate to a different level."

Panthers forward Joey Ogden was ejected, putting Liberty back on the power play for the final four minutes and sophomore forward Zak Hayes applied the final blow with 2:33 to go, receiving a diving assist from sophomore forward Zechariah Roberts through the slot and slamming a backhand home to cap the scoring.

"I'm proud of our guys," Handy said. "We played a good, tough brand of hockey. That's a key thing for us. We have to push ourselves to the edge without going over the edge. We let them go over the edge and we took advantage of it."

As time expired, the Flames huddled around Pinel, who, like Garvin and head captain Hughes, has emerged as a leader and a steadying force for the 15 freshmen.

"Matt Pinel had a big weekend for us," Handy said. "He works hard every day, he prepares well and he's been a constant for us this year, pushing the guys forward. I'm thrilled for Matt. It's his senior year and it's great to see he's playing the best hockey he's played for us in his Liberty career."

The Flames return to the LaHaye Ice Center next Friday and Saturday nights for 7 p.m. showdowns with ESCHL rival Rutgers in the last two games that count toward their ACHA DI ranking, which will determine if they qualify for nationals.

"We'll celebrate this today and come back ready to go next week," Handy said. "That's putting two back-to-back games together, which is something we haven't been able to do all year. What it does with our young team is it gives guys the confidence to know if they prepare well and if they work hard, they can be successful."