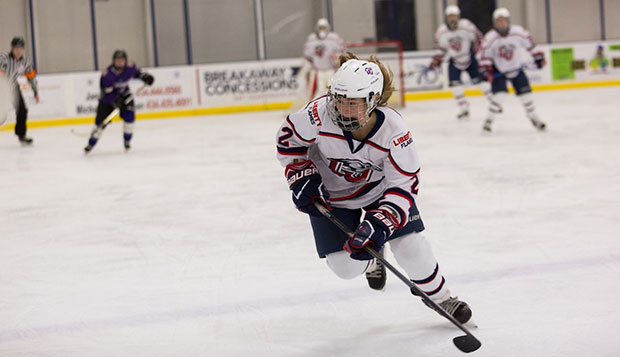 The Lady Flames (20-7-1), ranked No. 1 in the past two ACHA Division I polls, got a shutout performance from sophomore goalie Kelly Hutton, making her second straight start in net, and completed a dominating sweep of 12th-ranked ACHA DI newcomer McKendree University (10-11) with an 8-0 victory.

For the third game in a row, Liberty won without graduate forwards Carrie Jickling and Catharine Burrell, who are nursing injuries as the Lady Flames focus on preparing for a run at a second ACHA DI National Championship crown in three seasons, March 9-14 in Columbus, Ohio.

"It's hard playing without (Burrell and Jickling) but the freshmen stepped up this weekend," said Liberty freshman forward Aly Morris, who netted a hat trick in Friday night's 11-2 triumph. "We have to. It's kind of a day by day thing."

It was the 14th win in the past 15 games for the Lady Flames, who netted four goals in the first period before adding two in the second and two more in the third.

The Lady Flames outshot the Bearcats, 58-18, and got goals from seven different players, including two from sophomore forward Lauren McDonald, who capped the first-period scoring unassisted in the final second of play. Freshman forward Deena Birney had started the scoring midway through the first period, converting assists from junior forward Chelsey Greenwood and Gilmour. Freshman defenseman Dana McLeod made it 2-0 off a feed from Morris 30 seconds later before junior forward C.J. Tipping extended the lead to 3-0 at the 7:41 mark, putting away another pass from Gilmour.

In the second period, Liberty padded its lead with two goals in the final four minutes, the first by Greenwood unassisted with 3:45 left and the next by McDonald, her second of the game assisted by Greenwood with 12 seconds remaining.

Freshman forward Shelby Burdon stretched Liberty's lead to 7-0 less than three minutes into the third period by finishing an assist from freshman forward Vanessa DeMerchant, who capped the scoring in the final three minutes of play, capitalizing on assists from McDonald and Birney.

The Lady Flames will return to Penn State next weekend for two final regular-season games added to the schedule to help them stay sharp with nationals still more than a month away. The Lady Flames swept the Ice Lions by 4-1 and 3-1 counts in State College, Pa., on Jan. 27-28.

"Hopefully, we can do that again," Morris said. "We're going to Penn State just to keep our legs going and get ready for nationals. (This weekend's sweep) definitely helps our confidence and our teamwork. We can work on small things when we have a lead like that."