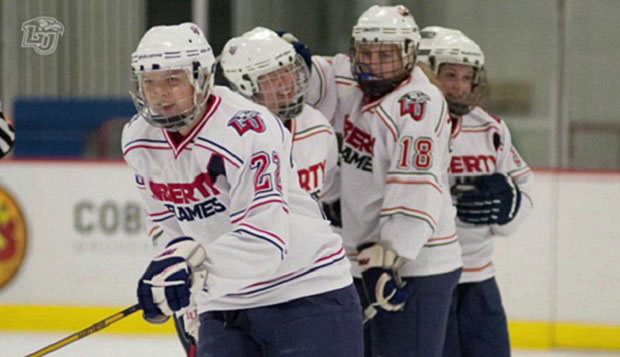 Liberty graduate forward Kaitlyn Scales (22) is in her third season as captain of the Lady Flames' ACHA Division II team.

On this edition of "Face to Face," Liberty University Club Sports Video Coordinator Patrick Strawn sat down with Kaitlyn Scales, a graduate forward and third-year head captain on the Lady Flames' ACHA DII women's hockey team, which hosts Pittsburgh on Saturday at 9:45 p.m. and Sunday at noon at the LaHaye Ice Center.

Strawn talks with the Apex, N.C., native, who is pursuing her master's degree in Sport Management with a concentration in Sport Administration, about her experiences on the team and playing for Head Coach Sara Niemi.

"It's been really great," Scales said. "She's been an awesome mentor and she's definitely stretched me and pushed me in different ways that I would never have imagined. Looking back, I'm extremely grateful for it and how it's built me as a person. I think we've found the right dynamic and we work well together."

She has enjoyed the challenge of serving as a team captain for the last three seasons and growing as a player and a person through the trials and tests of character.

"It's been a good tool to push me, on the ice, off the ice," Scales said. "It's definitely made me a better hockey player, but also a better leader. Not saying I'm perfect, by any stretch of the imagination, but I've gained a whole new confidence with the team and just in life in general. It's been an awesome time. There's different things that I can bring to the table and I know there are other girls on the team that also step up that don't necessarily have a letter. Our team works well like that, willing to learn from each other. It's a good competition."

With the Lady Flames (2-12) looking to snap a 10-game losing streak, Scales has had to go back to the drawing board to figure out a strategy for her teammates to work together toward a common goal.

"There's been times with our team where, you just sit there and ask, ‘What just happened?'" Scales said. "One game we're all clicking and we are working together and it all flows and another game, you come out a week later and ask ‘What happened to that same team that played last week?' If it is a bad game, where we're not jelling, you've got to scratch it, go back to practice the next week and just kind of start over. Get the lines rolling again, make sure that D partners are meshing well, things like that."