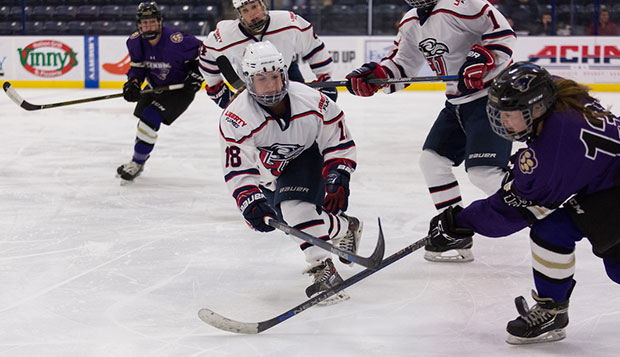 The Lady Flames were playing a second straight game without graduate forwards Carrie Jickling and Catharine Burrell — two of the top scorers in team history — and shifted the focus of their attack to the freshman line of Aly Morris (three goals), MacKenzie Carroll (two), and Alex Smibert, who combined for seven goals.

"That line's just ripping right now," Liberty Head Coach Paul Bloomfield said. "We parked the top line again, though we let Courtney Gilmour play, since she's a senior and Saturday is Senior Day. We played really well tonight, cycled the puck well. Aly got a hat trick and (sophomore) Tara (Lee) got her first goal ever. She ripped one tonight."

"We've never played them before," Bloomfield said. "This is a brand new team, so while we have a lot of freshmen, all but one of their players is a freshman."

With just under 5:00 left in the first, sophomore forward Laura McDonald received a pass from Greenwood and skated from the high slot down to the left crease before lifting a bar down shot past Malinowski for a 3-0 advantage.

McKendree ended Lady Flames sophomore goalie Kelly Hutton's shutout bid with a power-play goal scored by Domenika Reusche early in the second period. Liberty responded on Carroll's third shot from directly in front, tucking in the rebound of the second that bounced off the left post for a 4-1 lead.

With 4:48 left in the second, freshman forward Deena Birney put back a loose puck in the right crease after Gilmour was knocked down in front of Malinowski. Just 38 seconds later, after sophomore forward Lauren McDonald was flipped as she skated along Liberty's bench, Smibert deflected a through pass from fellow freshman forward Vanessa DeMerchant into the cage from in the right crease, stretching the Lady Flames' lead to 6-1.

Liberty added five goals in the third period, sparked by Lee's sharp-angled wrist shot from along the right boards off assists from Greenwood and McDonald in the first minute and a half and Morris's deflection of Smibert's shot from the top of the right circle in a crowd in front. Less than two minutes later, McDonald chipped a shot on goal by sophomore defenseman Katie Comeau across the crease to Gilmour for a point-blank finish that extended Liberty's lead to 9-1 with 14:11 to go.

Morris netted her second goal just over 20 seconds after the ensuing faceoff by threading a backhanded shot five-hole past Bearcats replacement goalie Haylee Gannaway to make it 10-1.

McKendree got one goal back with a shot from the high slot off the stick of Nadia Studnicka that glanced off the right post with 6:22 left before the Lady Flames capped the scoring and Morris completed her hat trick with Liberty's only power-play score, in the final minute. Morris one-timed a feed from the left wing by junior forward C.J. Tipping through the five hole.

The Lady Flames and Bearcats will meet in a rematch Saturday at 2:30 p.m. back at the LaHaye Ice Center.