Flames even Blue & Gray Cup series with Panthers at 1-1 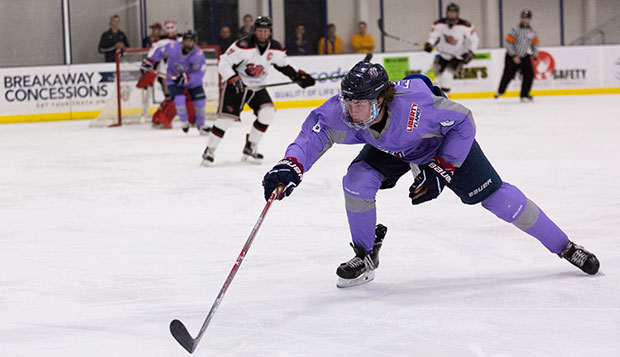 Decked out in purple sweaters and socks in honor of Liberty's chapter of Relay for Life, Liberty University's 20th-ranked ACHA Division I men's hockey team evened the fifth and final best-of-three Blue & Gray Cup series with No. 4 Davenport at 1-1 in a physical battle in Friday night's opener at the LaHaye Ice Center.

The Flames scored back-to-back power play goals early in a four-goal second period and fought off a Panthers comeback bid in the third period for a 5-3 triumph.

"It's always great when you're supporting a cause," Liberty sophomore forward Zak Hayes said. "We did a Military Appreciation night earlier and we're doing it for cancer tonight, so it's great and the boys were amped and extra fired up tonight. We had a lot of fun with it and it was a great game."

The Flames also sported pink jerseys for a Dec. 4, 2015 #LibertyHockeyFightsCancer matchup against Rutgers.

Davenport outshot Liberty 33-27 and was called for twice as many penalties (20-10), allowing the Flames to score four power-play goals to snap the Panthers' nine-game winning streak.

"That was huge for us," Liberty Head Coach Kirk Handy said. "I liked the way our team battled tonight. That was the closest we've come to a complete effort we've had all year."

Matt Cruickshank capitalized on Liberty's first power-play opportunity with 7:58 left in the first period. He received a pass from fellow freshman defenseman Jacob Fricks beyond the top of the right circle and rifled a shot past Davenport goalie Tanner Swift into the upper netting for a 1-0 advantage.

Then, just over three minutes into the second period, with the Flames on a five-on-three, sophomore defenseman Zane Schartz received a pass from freshman forward Quinn Ryan and lifted a left-handed wrist shot into the top right netting, doubling Liberty's lead to 2-0.

A minute later, still with a man advantage, Cruickshank took the puck from senior defenseman Ben Hughes and sent a cross-ice give-and-go pass to sophomore forward Colt Steele along the left boards. Steele returned a beautiful pass to Cruickshank in the right crease, where he one-timed a shot inside the lower right corner of the cage, extending the Flames' edge to 3-0.

"We did a great job on the penalty kill and our power play came through with some huge goals today so we can't ask for much more," Hayes said. "We've got to stay disciplined as a team. Smart penalties, obviously defend each other, but we want to make sure we're up on the power play or staying five-on-five. We don't want to be killing them."

Davenport ended the shutout with a goal in four-on-four action three minutes later before the Flames struck back at the 10:45 mark when sophomore forward Owen Harris sent a cross-crease feed to freshman forward Josh Hamilton who slid the puck inside the right post to make it 4-1. Just two minutes after that, freshman forward Jamie Crane capped the scoring for Liberty by cleaning up a rebound of his own shot in traffic in front, prompting the Panthers to pull Swift in favor of back-up goalie Jason Rhynold, who shut the Flames out for the final period and a half.

"Matt Cruickshank scored twice and Josh Hamilton and Jamie Crane each scored a goal so it was really nice to see those guys really step up and take ownership of this team," Handy said.

Davenport cut the deficit to 5-2 with 2:02 left in the second period on a turnaround shot in the right circle by center Luke Cowan, beating Liberty senior goalie Matt Pinel top shelf. The Panthers made it a two-goal contest by converting a power-play goal with 6:28 remaining in regulation, but would not get any closer in a fight to the finish.

"At the end of the game there, it got a little rough and you can expect more (on Saturday)," Hayes said. "Literally blood, sweat, and tears out there for the boys. It's always a tough battle but we've got guys getting ice and we've got to get ready for (Saturday), which is even bigger for us. It'll be another war but it's a lot of fun."

Liberty (20-12) and Davenport (21-5-1) will face off again Saturday at 7 p.m. in the deciding game of the Blue & Gray Cup, which the Panthers have owned for three of the past four seasons.

"That cup, we saw it out on the ice for warm-ups so we know what we're playing for," Hayes said. "It's tied, so the winner takes it home, so we'll see how it goes. We're excited and ready to go."

The Flames have even more incentive to complete the sweep, fighting for a berth in the ACHA DI National Championships after being left out last season.

"We've only got a couple weekends left and we're trying to make that national push, trying to get in the top 16," Hayes said. "Getting the first one's half the battle. Tomorrow, we've got to finish it off. We're ready for it."

"That's one game down. We aren't satisfied yet," Handy added. "We need to come with an even better effort (on Saturday). This is a big test for us this weekend. We're halfway done (but) there's still room for improvement and there were some parts of the game where we need to get it dialed back in. We let them dictate parts of the game to us and we want to make sure that we stay on our game.  They're still going to come back fired up and ready to go." 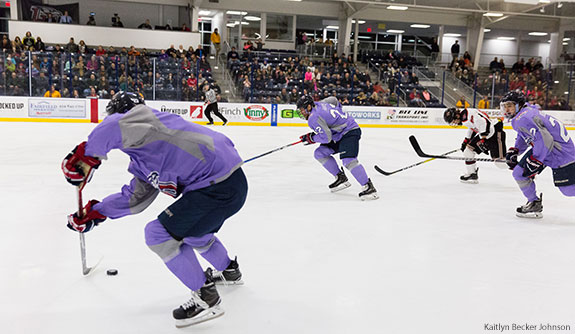