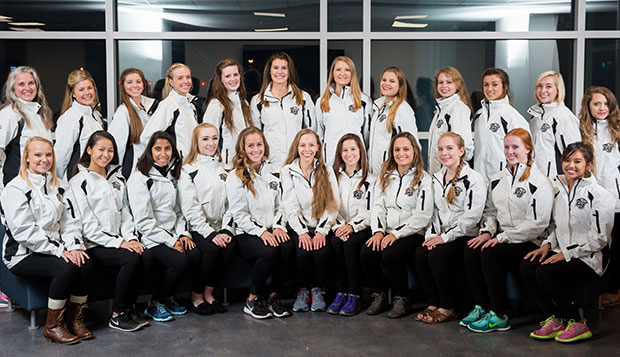 Prior to this weekend's first of three Eastern Sectional Intercollegiate competitions, hosted by MIT in Cambridge, Mass., members of Liberty University's figure skating team heard an inspiring talk on Tuesday from Rebekah Trittipoe, a representative of Central Virginia's Fellowship of Christian Athletes who shares motivational messages and devotions with the Lady Flames' NCAA Division I teams.

"I feel like they're coming in with a good mindset," Liberty first-year Head Coach Dawn Harter said. "Rebekah talked about how to prioritize life and to kind of rise above (distractions) and take in this moment. Now, they're ready to go and get on the ice and show what they have to show."

The Lady Flames hope to overcome a few ankle injuries and lower back issues to deliver their best performances in Friday's and Saturday's competitions.

They will be complemented by Pre-Juvenile skaters Rebekah Hicks and Leah Cowan, both seniors who also perform on the synchronized skating team, and Preliminary skaters Avery Campbell, a junior, and freshman Gerandine Zape. An injury will prevent freshman Kimmie Joe from skating her Juvenile program, but she will perform a Preliminary dance routine.

Liberty has had to scale back its number of entries into the two-day competition at MIT due to an unusually high turnout expected for this weekend's event.

"MIT had a record-breaking number of starts in an Eastern Sectional Intercollegiate competition — 412 from 30 colleges," Harter said. "Going into the competition, we had 33 of a possible 35 starts filled with our team, but we have had to reduce that to 17. Everybody is going but they'll only be competing in one event. We had to take a dance start out and all three team maneuvers (entries) were removed."

She hopes not to have to resort to similar measures when Liberty hosts the second Eastern Sectional competition, March 3-4 at the LaHaye Ice Center, and travels to the third and final event March 18-19 at the University of Delaware.

"We're pretty confident we'll be able to host everything," she said. "Everybody loves to come to our university. They love our campus and our rink and the layout. We always hear positive feedback from the officials as well as the skaters."