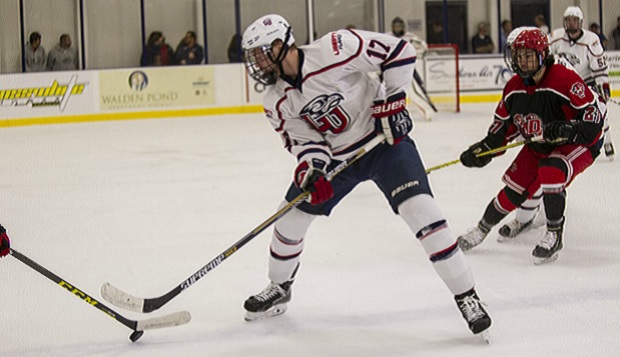 The Blue & Gray Cup will be awarded for the fifth and perhaps final time during this weekend's series between the Liberty University ACHA Division I men's hockey team and Davenport University at the LaHaye Ice Center.

With the addition of New York University and Syracuse to the Eastern States Collegiate Hockey League (ESCHL) raising its membership to eight schools next season, the Flames won't have as many non-conference contests on their schedule. So the rivalry with the Panthers will fall by the wayside, at least for next season.

"It'll be exciting," Flames senior defenseman and head captain Ben Hughes said. "They're No. 4 in this week's ACHA DI rankings, so Davenport is going to be a huge series for us."

That will be critical for Liberty considering its standing in the ACHA DI postseason picture, as the No. 20-ranked program in a 20-team National Championship tournament, set for March 9-14 in Columbus, Ohio. For the Flames to stage a coup on their home ice and steal away the Cup by winning the best-of-three season series from the Panthers, who currently hold a 1-0 lead, they will have to execute their offense to near perfection and win the physical battles for the puck.

"They have a really good team, they have a lot of good skill guys, so If we can keep the pressure on and keep them in their end, it'll be easier for us," Hughes said. "We've developed and shown progress the past couple of weekends. We've put together really good periods, but playing the full 60 minutes is important. So if we can just stay focused the whole time and put pressure on them instead of them putting pressure on us ... we should get some wins this weekend."

Liberty scouting report: The Flames have four double-digit goal scorers, led by junior center Grant Garvin (17G, 22A), the only player with more than one game-winning goal (he has four). Sophomore defenseman Zane Schartz (13G, 18A) ranks tied for second in scoring with freshman center Quinn Ryan (10G, 21A). Sophomore Owen Harris (13G, 11A) is fourth followed by freshman Garrett Nelson (9G, 13A), who has scored seven of his nine goals on the power play.

Davenport scouting report: All four of the Panthers' losses this season have come away from the Patterson Ice Arena, their home rink. Davenport is coming off a home-and-home sweep of Oakland last weekend and a 3-2 victory at Indiana University of Pennsylvania on Wednesday. Davenport's attack is sparked by Alex Hulford (19G, 16A), one of three players with three game-winning goals along with Aaron Beally (7G, 19A), and Alyx Fonseca (5G, 14A). Hulford is followed by Chris Eckler (15G, 18A), Everett Thompson (12G, 17A), Wade Weisgerber (9G, 17A), and Beally. The Panthers will be without second-leading scorer Jordan Simmonds (15G, 18A), who has netted a team-high four game-winning goals and nine power-play scores. Simmonds is representing Davenport on the United States Team at the World University Games in Kazakhstan.

All-time series: Liberty is now 18-22-1 against Davenport in a rivalry that dates back to the 2005 ACHA DII national tournament. The Panthers have won the last five meetings with the Flames, who won their only Blue & Gray Cup in the 2013-14 season. In 2005, Liberty eliminated Davenport in the opening round that year in a tournament hosted by Oakland, in Rochester Hills, Mich. The following season, playing each other for the fifth time in a month, the Flames edged the Panthers again, this time in overtime in the 2006 DII national semifinals, before falling to Oakland in the final.

Liberty and Oakland moved up to ACHA Division I the next year, when the Golden Grizzlies won their first DI national title and Davenport returned to the ACHA DII championship game, losing to rival Michigan State. The Panthers went on to claim the next three ACHA DII national titles before making their move to ACHA DI in 2010 and immediately capturing the DI national crown by defeating two-time defending champion Lindenwood.