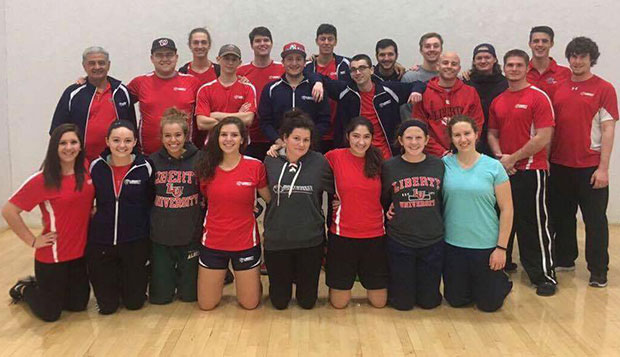 Liberty University's men's and women's racquetball teams brought 23 players to compete over a 24-hour period this past Friday through Sunday in the third Mid-Atlantic Collegiate Racquetball Conference tournament of the season, hosted by North Carolina State in its 20-court Carmichael Gym in Raleigh, N.C.

The event drew 122 players from 16 schools, according to Liberty Head Coach Danny Rodriquez. UNC-Chapel Hill, with 30 players, was the only school with more entries than the Flames and Lady Flames

"It was the biggest tournament ever held (by the MACRC)," Rodriquez said. "We had some good results from everybody. Some did better than others, but they all did well."

While the Flames didn't have any Level 1 players after Pablo Jaramillo graduated this winter, senior Paul Messerly and juniors Seth Jordan and Jacob Simrell placed second, third, and fourth, respectively, in the No. 2 Gold singles bracket. Junior Daniel Siebler and Jordan teamed up to place second in the No. 2 doubles division.

Walker and graduate Joshua Swiney combined to capture first place in the No. 4 Gold doubles bracket.

Alvaro Jaramillo, Pablo's younger brother, and sophomore Jaron Proehl teamed up to place second in the No. 3 Red doubles division, with graduate Paul Miller and Tinsley taking fourth place as a tandem. Miller also placed third and Swiney fourth in the No. 4 Blue singles draw.

Carroll and Schuler joined forces to take fourth place in No. 1-2 doubles competition with Richards and Demetros finishing fifth as a duo.

In the alumni/coaches/faculty division, Rodriguez teamed up with Assistant Coach Shawn Furman to claim first place in doubles after Furman won the singles division.

The next MACRC tournament for the Flames and Lady Flames is scheduled for Feb. 24-26 at UNC-Chapel Hill.