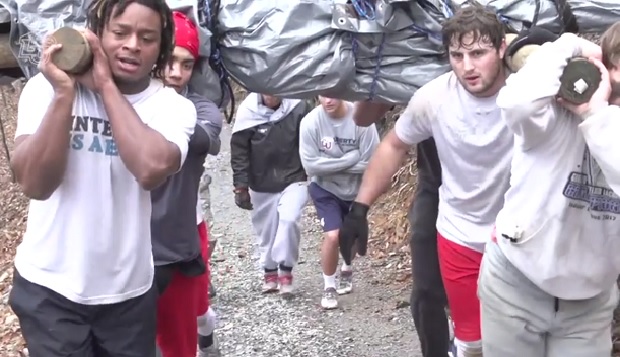 Over a period of 30 hours last weekend, members of Liberty University's men's lacrosse team ran the equivalent of a marathon while shouldering a lot of extra weight and working on very little sleep.

From the start of Friday's regular practice at 3:30 p.m. through Saturday at 9:30 p.m., the Flames went through a series of rigorous exercises and physical tests with only four and a half hours of down time provided.

"They did a great job in investing in these guys and getting them to step up to the plate, to take things head on," Flames Head Coach Kyle McQuillan said. "It was an experience that's going to make us a lot stronger moving forward."

Prior to the weekend of training, team members were issued copies of "The Hard Hat," by Jon Gordon, which introduces "21 Ways To Be A Great Teammate."

"It was not the only goal of ours to push them physically," McQuillan said. "The book went through and embodied what it means to be a teammate. We spent time on the emotional and spiritual sides as well as the physical and we used that book as a visual for some of the things we were trying to accomplish."

After six hours of pulling trailers, flipping tractor tires, carrying sandbags — including over the wooden obstacles at The Patch next to Liberty's beach volleyball courts beyond the East Campus intramural fields —and other conditioning drills, the team turned in for the night at around 11 p.m.

"Through this event, I know they're just trying to grow us as a team, help us to grow strong bonds together, help us to unify together as a team," Liberty sophomore long-stick midfielder Win McKeever said during a break in the training. "We're growing spiritually, emotionally, physically. It's all very mentally draining."

Little did they know they'd be woken up from their barracks inside the East Campus Volleyball Facility at 1:15 a.m. for another two and a half hours of training, starting with a group run. They returned to their sleeping quarters at 3:30 a.m. before being awoken at 6 a.m. for the final nine and a half hours of workouts, which included battles on the Liberty Paintball Fields and building and transporting a giant sled weighed down with hundreds of pounds of sand bags that they shouldered up Candlers Mountain like a casket or a cross.

"The premise (of Warrior Fellowship) was to come in and push these guys pretty hard physically, to get them to a point where they're physically, mentally, emotionally exhausted," McQuillan said. "At that point, they can be encouraged to push through that and find out they've got the ability to do more than they think is capable, especially when they have the support of their team."

He said the players, though caught off guard by the grueling nature of the training, bought into the mission of developing their mind, body, and spirit over a weekend they won't soon forget.

"The thing that surprised me most was how they responded, because when we saw those guys Saturday morning and they'd gotten just a couple hours of sleep, they were tired and a little cranky, probably a little angry as well, but when they embraced what was going on, they kind of rose to the occasion and did a great job of making the most out of the situation," McQuillan said. "They had a great attitude, to push through, and did a fantastic job as a whole, once everything was said and done."

McQuillan expects the experience to pay dividends for the Flames this spring season, which opens Feb. 18 at 3 p.m., against East Carolina on the Liberty Lacrosse Fields.

"We're looking forward to using this past weekend as a springboard into the next few weeks of practice," he said. "There were a lot of things we were able to take away from it, and the things we learned and opportunities we generated hopefully will help us have a very successful season."