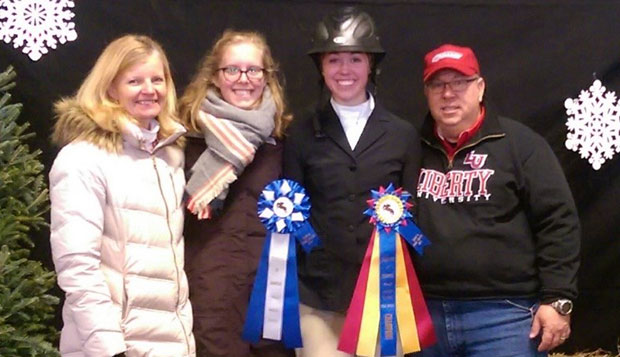 It was the first national-level milestone for the Lady Flames as Burdette joined a list of champions that includes many of the top names in the history of collegiate riding, according to Liberty Head Coach Jim Arrigon.

Burdette opened the competition by winning the Intermediate flat class before senior team captain Elizabeth Chenelle followed with a fourth-place finish in Open fences, giving the Lady Flames the early overall team lead in the national-level show. That held up for several more classes over 15 other teams, from Kansas State to Rhode Island and Savannah, Ga., invited to compete in the series finale.

Randolph College, also from Lynchburg, Va., ended up as the overall team champion for the weekend's event and Savannah College of Art & Design clinched the Series Champion, ahead of the Reserve Champion WildCats.

Meanwhile, Liberty's Western Team competed at Campbell University in Buies Creek, N.C., in the penultimate weekend of its regular season, and won its second straight show (and second show in team history).

In the overall team standings, Liberty closed the gap but remains in third place in the region, behind St. Andrews and North Carolina State. The Lady Flames have one final show at St. Andrews in Laurinburg, N.C., on Feb. 25, followed by Regional Finals for Davidson, Hicks, Sims, and sophomore Leah Ofalt. Devan and Kisner are also on the brink of qualifying for regionals, also to be hosted by St. Andrews.