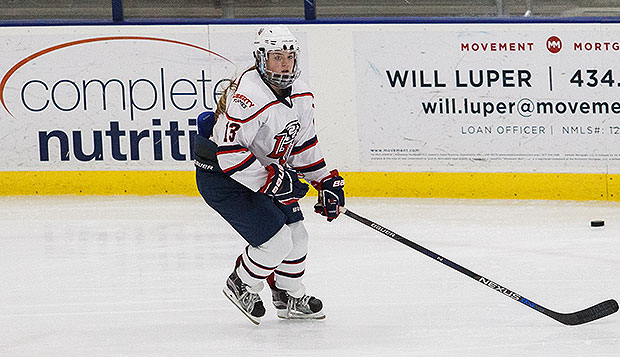 For this weekend's trip to State College, Pa., Head Coach Paul Bloomfield opted to sit out graduate forwards Carrie Jickling and Catharine Burrell as well as sophomore forward Lauren McDonald, who is nursing an injury. Liberty (18-7-1) still dominated the Ice Lions by 4-1 and 3-1 scores, solidifying its No. 1 status in the ACHA DI national rankings heading into next weekend's season-ending home series against McKendree University.

"I really felt the girls worked well together tonight and I was glad we were able to give them an opportunity to play," Bloomfield said after Saturday's second game, when freshman forward Deena Birney was injured in the second period. "We had shortened the bench last week against Miami, when we played mostly girls with experience, so we made up for it tonight."

Bloomfield experimented with some new lines during the series.

"I think our freshmen were kind of like deer in the headlights when they realized some of our seniors weren't going to play," he said. "We told them, ‘The reality is you girls need to step up. You can't count on everyone else to lead the way. They need the experience.'"

After a slow start, the Lady Flames took control of Friday's first opener in the third period, providing junior goalie Rosie Kelly plenty of protection and padding its lead by outshooting the Ice Lions, 37-11.

"Rosie hadn't played a full game since October so we wanted her to get some hours in before (ACHA DI) nationals (in March)," Bloomfield said. "She played exceptionally well tonight. She played well all weekend."

Freshman forward Alex Smibert ignited the Lady Flames' offense with three goals in two nights, including her first-period score off assists from freshmen forwards Emily John and MacKenzie Carroll with 6:08 left in the frame.

Penn State tied it at 1-1 with 8:52 left in the second period before Liberty freshman defenseman Dana McLeod scored off the first of two assists from senior forward Courtney Gilmour with 2:58 remaining in the period.

"Courtney worked hard tonight," Bloomfield said. "There's a chance she may stay next year, so it was good to let her lead the pack."

In the third period, freshmen forwards Aly Morris and Tiana Lisle worked together to stretch Liberty's lead to 3-1 before John iced the victory off assists from Gilmour and Carroll with 5:04 remaining in regulation.

"It was a battle," Bloomfield said. "We didn't play well in the first two periods, but in the third period we put it away."

In Saturday's rematch, Liberty outshot the Ice Lions 45-22 with Kelly earning the victory in net, allowing just one goal for the second night and making 21 saves.

Freshman defenseman Rachael Gibson netted the Lady Flames' first goal unassisted with 14:10 left in first period. She took control of the puck on the defensive end and skated all the way down the wing and behind the net before finishing with a wraparound shot.

Smibert then scored her second goal, assisted by John on a power play with 4:44 left in the second period.

After Penn State trimmed the deficit to 2-1 with a power-play goal with 3:24 to go in the second, Smibert scored again, this time unassisted, to recharge the Lady Flames' attack with 13:26 remaining in regulation.

Kelly was injured while guarding the cage with 3:11 left on a scrum in front of the net and she was replaced by sophomore Kelly Hutton, who closed out the victory.

Penn State's goalie made 75 saves over the weekend and contained the Lady Flames for the most part.

"Their goalie was amazing," Bloomfield said.

Next Friday and Saturday, the Lady Flames will welcome McKendree University to the LaHaye Ice Center, with Gilmour the only senior to be honored on Saturday's Senior Day.