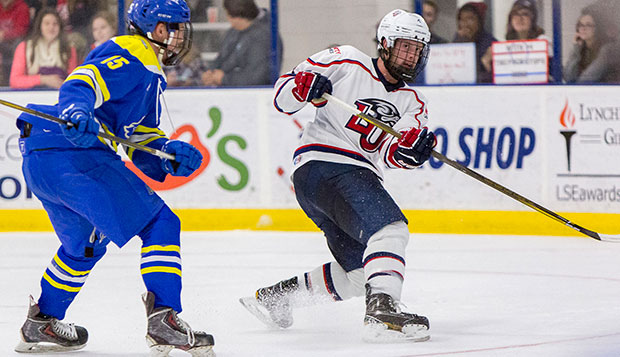 If 55 minutes of solid hockey were enough to win a game in the Eastern States Collegiate Hockey League, Liberty University's ACHA Division I men's hockey team might have swept Delaware in Friday's and Saturday's series at the Fred Rust Arena in Newark, Del.

Unfortunately, a full 60-minute effort is what it takes to get the job done and the Flames punched the clock early for the second night in a row, with the Blue Hens capitalizing on a second-period lapse to score five goals in Saturday's 8-5 setback.

"It was 2-2 after the first, and 3-3 in the second, and for almost 35 minutes it was a great hockey game," Liberty Head Coach Kirk Handy said. "We had a stretch there of four and a half minutes where they scored five goals. We just fell apart. We didn't have an answer to push back and that was disappointing."

Freshman forward Josh Hamilton's rebound of sophomore forward Zak Hayes' shot from the high slot pulled the Flames within 2-1 before Liberty freshman defenseman Matt Cruickshank knotted the score with 2:48 left in the first period off a fast-break feed from Hayes.

Delaware reclaimed a 3-2 lead with 15:54 left in the second before the Flames responded to tie it at 3-3 less than 30 seconds later on a shot from the perimeter off the stick of sophomore defenseman Zane Schartz. Liberty killed a five-minute penalty assessed to freshman forward Josh Bergen for boarding before the roof caved in on a five-minute stretch that started at even strength.

The Blue Hens capitalized on a couple odd-man rushes and then a couple power-play scores to seize an 8-3 advantage going into the third period.

"We have to understand with this team it's going to be a process and we've got to learn how to win, but it's time to figure out the process and time that our guys step up as a group and take ownership of it," Handy said. "We can't hit the snooze button for four and a half minutes and not expect other teams to take advantage of it."

Liberty's coaching staff gave the Flames a fiery chat during the second intermission and they responded with goals by junior forward and leading scorer Grant Garvin off an assist from freshman Garrett Nelson and freshman forward and third-leading scorer Quinn Ryan on a power play.

"At the end of the second period, we challenged our guys," Handy said. "We circled back with them and made sure they understood that point of game we had to change from where we had almost no pushback to battling back with two goals and getting some other chances in the third period."

The Flames (19-12, 8-7 ESCHL), who entered the series tied for third in the league standings and within striking distance of second-place Delaware (20-9, 12-4) and league-leading Stony Brook, lost ground in their battle for the regular-season title and ACHA DI National Championships autobid.

Liberty gets another shot against an ESCHL opponent in Sunday's 3 p.m. rematch with Rutgers in Monmouth Junction, N.J. That's a team that erased a 3-0 deficit to defeat the visiting Flames, 5-3, in another single game played Dec. 4 in New Jersey.

"Tomorrow's a new day and we're looking forward to it," Handy said. "It's going to be a big game for us. It's going to require us to come together as a team to get the job done. For us right now, we're battling for our lives and making sure that we come to play. That's all we can control at this point."