Flames shut out in opener on Blue Hens' Olympic-sized ice 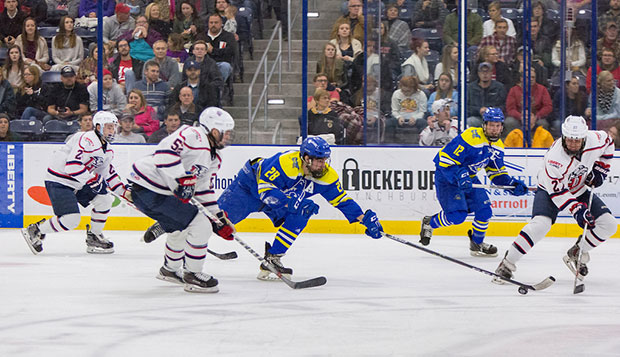 Liberty sophomore defenseman Zane Schartz (52) and forward Zak Hayes (right) close in on the puck in the Flames' first meeting with Delaware on Nov. 11 at the LaHaye Ice Center. (Photo by Caroline Cummings)

Liberty University's ACHA Division I men's hockey team outshot host Delaware 42-28 in Friday night's Eastern States Collegiate Hockey League (ESCHL) series opener. But the Flames (19-11, 8-6 ESCHL) allowed the Blue Hens (19-9, 11-4) to score a shorthanded goal in the first period, a second seconds after a power play expired in the second stanza, and an empty-netter in the third period of a 3-0 setback.

Delaware improved to 9-2 on the season playing on its home Olympic-sized ice at the Fred Rust Arena. It was Liberty's second shutout loss on the road in less than three weeks after falling by the same score Jan. 8 at Stony Brook.

"It was a back-and-forth game," Flames Head Coach Kirk Handy said. "We did a lot of things well and we had our chances tonight. We just were unable to put them in the net. Grant Garvin hit one off the crossbar in the third period, when we outshot them, 18-5, and really came on and played well and were able to sustain pressure. The third period was our best period of hockey.

"We need to make sure we have that type of effort for 60 minutes," he added. "That's something we have to work on. I don't think anybody's discouraged. It's a great opportunity to learn and get better. We have to be able to play and compete for 60 minutes like we did in the third period."

The Flames started nearly as strongly as they finished, but had a costly breakdown on a power play in the first period that led to a bit of a letdown in the second. Delaware forward Cole Zucker, the Blue Hens' second-leading scorer, got a breakaway and capitalized on the opportunity by sneaking the puck past Liberty senior goalie Matt Pinel for what turned out to be his team-high fifth game-winning goal.

"I liked the way we came out of the gate and liked our first period, even though we were down, 1-0," Handy said. "We did some good things. But then we had a stretch in the second period where we let them dictate things to us and weren't able to establish our game a whole lot. We were back on our heels and then we were behind the 8 ball going into the third."

Leading scorer John Redgate (20 goals, 17 assists) padded Delaware's lead to 2-0 with a cross-crease shot seconds after the Blue Hens' power play had expired in the second period and later added the empty netter.

The Flames were at a bit of a disadvantage playing on the larger rink, but Handy expects them to be ready for Saturday's rematch.

"Any time you play on the larger ice it takes a little time to get used to the Olympic rink," he said. "We adjusted fairly well (Friday night). We just have to be better mentally prepared to compete for the full 60 minutes."

Liberty will look to salvage a split with the Blue Hens on Saturday, when the puck drops at 5:15 p.m., before traveling to Rutgers for another key ESCHL showdown on Sunday at 3 p.m.