Flames pay back Hokies with Midnight sweep in Vines Center 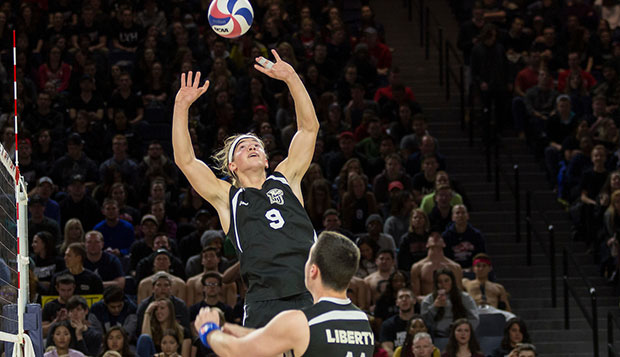 Liberty sophomore Kaden Knepper sets in front of a crowd of close to 4,000 fans in the late-night sweep at the Vines Center. (Photo by Nathan Spencer)

Redemption was sweet for Liberty University's men's volleyball team early Saturday morning, when it won the "Midnight Mayhem" contest for the first time in the three years it has hosted it at the Vines Center. The Flames opened the spring season by avenging last year's straight-set loss to Virginia Tech with a 25-23, 25-18, 25-21 sweep of the Hokies in front of a crowd of close to 4,000 mostly student fans.

When Flames junior outside hitter Eugene Dejesus spiked a kill off a block by junior setter Spencer Andrews to set up match point and then blocked a spike by the Hokies' 6-foot, 11-inch-tall middle hitter Greg Hahn for a winner, Liberty could finally celebrate the long-awaited victory in the Vines Center.

"It was amazing, a lot of fun," Dejesus said. "We had a lot of adrenaline. It's been overdue for a long time. It gives us a lot of confidence to know what we're capable of. It's a really big confidence boost. I'm so glad we won. I'm sure the fans enjoyed it as well."

"It was a huge crowd, equal to last year's or even bigger," Rigg added, crediting the Club Sports and Vines Center staff for promoting and producing a top-quality event. "It was a great atmosphere."

Rigg said the Flames came into the "Midnight" match better focused and more mentally prepared than in the past two years.

"The last two years there was a lot of hype and nervousness," he said. "There's a lot of guys on this team who are fairly quiet, but with their quietness, they have a sense of calm, even in the midst of tumultuous circumstances. So I knew coming in tonight they might be nervous, but they really just calmed down, took a big breath, they did what they needed to do and they played like they knew how to play."

In Game 1, Liberty sophomore setter Kaden Knepper put Virginia Tech on its heels with a powerful jump serve and junior T.J. Forsythe dinked a winner over the net for an early 11-9 advantage.

"Kaden was terrific tonight," Rigg said. "His jump serve was like a missile. They couldn't pass it and his setting and distribution was great. He set the right person at the right time. We talk about making decisions based on what the defense is doing and he was great at looking across the net, seeing where their middle blocker was going and going the opposite way every time."

Three points later, junior libero Sam Wyman's pass off a service receive set up Forsythe perfectly for a spike kill and a 13-10 lead. Sophomore middle hitter Brady Quakenbush made it 15-12 with a one-timed, two-handed tap winner before junior opposite hitter Scott Zalizniak spiked a kill into the back right corner for a 16-13 advantage.

Back-to-back powerful serves by graduate defensive specialist David Hong pushed the Flames' lead to 19-14 before Knepper and Forsythe dinked winners and Forsythe and Zalizniak one-timed kills, setting up a Liberty game point at 24-21. Virginia Tech cut it to 24-23 before a potentially game-tying spike down the right sideline was flagged wide, giving the Flames Game 1.

Dejesus spiked three kills to lift Liberty to an early 5-2 lead in Game 2 and a stuff block by Zalizniak pushed it to 10-5, prompting a Hokies time out. Zalizniak later put the game away by spiking two winners off Virginia Tech blocks, as he did to give the Flames an early 9-8 advantage in Game 3.

"Scott (Zalizniak) helped us a lot, especially his blocking on the middles, because they were huge and once we shut them down, we kind of got Virginia Tech out of system," Dejesus said.

A two-handed jump-ball block winner by Dejesus, followed by his spike kill to the right of a Hokies block made it 13-11 before Knepper set backwards to Quakenbush for a kill off a block and Forsythe finished another off the hands of the Hokies. Knepper caught Virginia Tech's defense off guard by setting a winner over the net, extending Liberty's lead to 18-14, before Virginia Tech went on a five-point run, capped by a spike kill by senior middle blocker Nestor Payne to seize a 19-18 lead.

The Flames responded by putting the match away with a 7-2 spurt sparked by Zalizniak's spike kill off a block, Knepper's stuff block of Payne, and Dejesus' spike down the left sideline for a 23-20 advantage, setting up his game-winning spike and block.

"Our serve-receive passing was amazing tonight," Rigg said. "We'd watched film and David Hong and Sam Wyman, our libero, knew what every server was going to do and knew what we were going to do on every rotation. They passed to perfection and it opened up the offense. They made a bunch of guys who were good players into a great team. There was great chemistry tonight and that's what we're made of. They wanted to win and they willed themselves to a victory tonight. It was terrific."

"We had no idea what to expect since we hadn't seen Virginia Tech's B team all year," Flames Assistant coach Ryan Culkin said. "My group of guys are young and we had to work more on the emotional and mental side. They really showed up to play and it was awesome."

Sophomore setter Eli Plasterer, the only player on the team that's not a freshman, and libero Jared Patterson helped quarterback the offense and anchor the defense.

"Eli did a great job of leading the team and keeping the guys minds in the game, communicating throughout the sets," Culkin said, noting right-side hitter Daniel Koloff, outside hitters Gabe Jackson and Sam Hess, and middle hitters Emmanuel Cuffee and Nate Jenson were his go-to hitters. "Jared passed really well. He stepped up and did a really good job."

Rigg said the wins over an opponent ranked as high as No. 1 in the nation last season should give the Flames a boost when this year's first National Collegiate Volleyball Federation (NCVF) polls come out on Feb. 8. Before then, Liberty will travel to Southern Virginia for a single match on Thursday. The Flames' DI and DII squads will then host an ECVA South Division Tournament on Feb. 11 in the LaHaye Multipurpose Center. 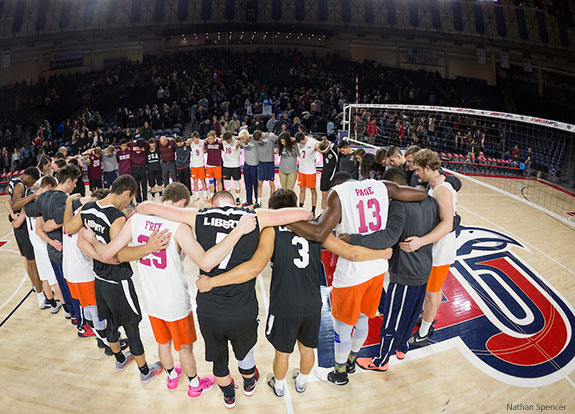