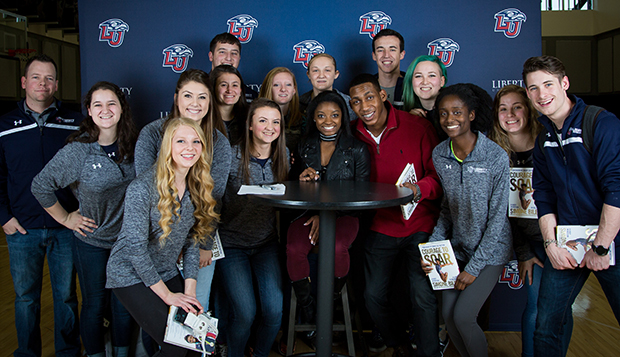 One week before they are scheduled to open their season, members of Liberty University's men's and women's gymnastics teams received a major motivational boost by sitting in the President's box for Friday morning's Convocation at the Vines Center and meeting U.S. Olympic gold medalist and special guest Simone Biles after the service.

"They were ecstatic, just to be able to hear her speak and seeing that she's a normal person just like them," Flames second-year Head Coach Tim Kappel said. "As far as history goes in gymnastics, at end of the day, she could be the greatest ever. They heard about her path and saw that she's a 19-year-old kid and that she was able to accomplish what she did all on her hard work. They realized anything is possible if they keep working at it. How can that not motivate you? They were on Cloud Nine."

Kappel was invited to sit on stage during Convocation by Liberty Senior Vice President for Spiritual Development David Nasser. President Jerry Falwell presented Simone with a Liberty Gymnastics jacket and she had a meet-and-greet with members of the Flames and Lady Flames afterward.

"It's really exciting, but for us, because we've been in the sport for so long, it is such an honor," senior gymnast Ashley Grim said. "We respect her so much; we understand her hard work and all her dedication to the sport and the long hours. We have never even trained as much as she does, but we understand how hard it is to be a gymnast, so especially at her caliber, it's astounding."

"When I saw that she was coming to Liberty, I was shocked," senior teammate Jessie Hogue added. "I couldn't believe that they could bring her here. It is cool seeing our sport get recognition, and it's cool to meet one of the best athletes on the Earth."

Kappel, who has trained several youth through USA Gymnastics who have gone on to compete for NCAA Division I programs, could relate to the experiences Biles shared about her childhood and progression through the sport.

"Simone had it even harder, since she was adopted and went through a lot of things growing up," he said. "Hers is a pretty neat story of perseverance. Every kid has their story. Some of the best athletes I've coached, unfortunately, were ones who had to go through the hardest things at home. They proved that, with the right amount of work and passion, you can do it."

"We have the same core group as last year and we're looking to build off what we did then with a couple new athletes," Kappel said, noting that this year, the team will travel to the April 16 NAIGC National Championships in Columbus, Ohio. "This year, they've gotten a little more efficient. They're getting their skills down and they're hitting their landings so they should be ready to compete that much better, competing with confidence."

He said the team has shown steady progress in the gym since returning from Christmas break.

"They're pretty jazzed up right now, in workouts from the last few days, realizing we're getting in the red zone," Kappel said. "After getting back to school, they're getting their heads back into gymnastics, knowing the meet season's almost here and it's off to the races."

Read more about Friday morning's Convocation and the team's introduction to Biles on Liberty's news site.