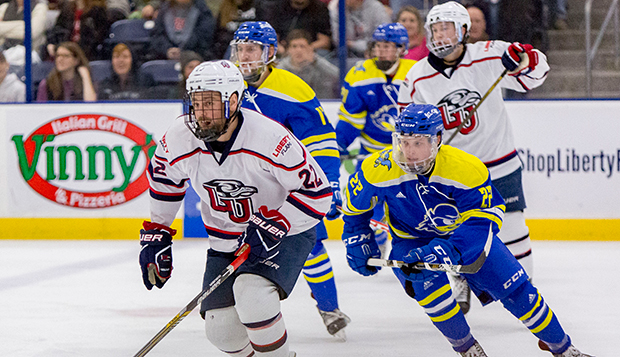 Based on its No. 18 standing in this week's national rankings, Liberty University's ACHA Division I men's hockey team is sitting on the bubble of qualifying for the 20-team ACHA DI National Championships for the ninth time in the past 11 seasons.

The Flames can dictate their own destiny starting this weekend with a critical three-game swing at Eastern States Collegiate Hockey League (ESCHL) rivals Delaware and Rutgers.

"It's a huge weekend for us with three huge games," Liberty Head Coach Kirk Handy said.

Home series against Davenport on Feb. 3-4 and Rutgers on Feb. 10-11 will be the last four games factored into the Flames' final ranking. (The Feb. 17-18 regular-season-ending series with Rhode Island and the ESCHL tournament, hosted by the Rams, will not.)

The ESCHL regular-season champion is one of six conference champions to receive automatic bids to the March 9-13 ACHA DI National Championships in Columbus, Ohio, and that free pass may be the Flames' best bet for a postseason berth. Liberty (8-5 in ESCHL play) is currently tied with Rhode Island (6-4-4) for third place with 16 points in the conference standings behind only Stony Brook (11-4-1, 23 points) and the Blue Hens (10-4, 20 points).

Even without winning the ESCHL, the Flames can still punch their bus tickets to Columbus by remaining in the top 20 as No. 10 Jamestown is not eligible for the playoffs this season and all of the conference leaders, likely to earn the autobids, are currently ranked ahead of Liberty.

The Flames are 3-3 so far this month and are embarking on their third road trip of the New Year, after being swept by the Seawolves on Jan. 7-8 on Long Island, N.Y., and splitting two games at Alabama on Feb. 13-14.

Liberty scouting report: Freshman forward Cody Clarke enjoyed a breakout series in last weekend's sweep of Oakland (Mich.) at the LaHaye Ice Center, scoring his first three goals as a Flame after sitting out all of the fall semester. His younger brother, Andy, also scored twice and assisted Cody on his first goal in Friday's opener.

Sophomore defenseman Zane Schartz has emerged as one of the Flames' top scoring threats with two goals against Oakland in last weekend's sweep, bringing his totals to 12 goals and 18 assists, trailing only junior forward Grant Garvin (15G, 21A) on Liberty's leaderboard. Freshman forward Quinn Ryan returned from injury to contribute a goal and two assists against the Golden Grizzles to bring his third-leading scoring totals to 9 goals and 19 assists, followed closely by sophomore forward Owen Harris (13G, 11A) and freshman Garrett Nelson (9G, 11A).

Delaware scouting report: After starting the season at 14-1, capped by a Dec. 2-3 sweep of Stony Brook on their home ice, the Blue Hens were swept by the Seawolves in last weekend's rematch on Long Island by 9-3 and 7-2 scores. That was a week after being swept by No. 2 Ohio, 1-0 and 10-1, in their first action of the New Year. In all, Delaware has dropped eight of its past 12 games.

Delaware's offense is anchored by John Redgate (18G, 17A) and Cole Zucker (15G, 19A), its only two scorers with more than 20 points. Redgate has netted a team-high five power-play goals and is tied for second with three game-winners, one fewer than Zucker. Pierce Lamberton (12G, three game-winners, 6A) and Vincent Zingarelli (5G, 13A) both have 18 points.

Rutgers scouting report: Martin Bernstein stepped down as the Scarlet Knights' head coach for personal reasons this week, in the middle of his second season at the helm. Joe Dickson and Michael Vishnevetsky will serve as interim co-coaches for Sunday's game against the Flames.

The Ice Knights' offense is sparked by Brian Gnad (14G, 16A) and Kevin Fitch (12G, 11A). Both have recorded two game-winning goals and Fitch leads the way with five on the power play. In goal, Christopher Marsillo has spent all but 48 minutes between the pipes, going 10-10 with one shutout, a 3.44 GAA and 91.6 SP.

All-time series: After splitting their series with Delaware on Nov. 11-12 at the LaHaye Ice Center, the Flames still trail the Blue Hens, 16-14-2. Liberty had its four-game road winning streak and four-game unbeaten streak against Rutgers stopped on Dec. 4 in New Jersey. The Flames now lead the series with the Ice Knights, 4-1.

Coaches: Handy is in his 17th season as Liberty's head coach with an overall record of 365-163-25. Julian Giantonio is in his second season as Delaware's head coach and has a record of 40-18-4. Dickson and Vishnevetsky are in their first week as Rutgers' coaches, replacing Bernstein, who went 22-23-2 in a season and a half of leading the Ice Knights.