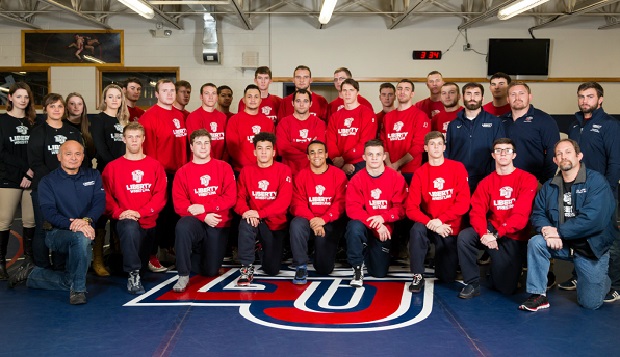 This Friday and Saturday, the rink at the LaHaye Ice Center will be covered and repurposed into a six-mat wrestling ring as Liberty University hosts the NCWA National Duals for the first time.

The Flames, who moved up to No. 2 in the latest NCWA rankings and are seeded second in the 20-team tournament, have placed in the top three of the past five National Duals, held in Dalton, Ga. They will have home-mat advantage, although it will be on an unusual surface.

"This is a precedent to say the least," Liberty Head Coach Jesse Castro said, noting that a cover will be installed over the ice Wednesday night and the mats will be in place Thursday afternoon for incoming teams to practice on. "It's a pretty high-tech cover that insulates the ice really well."

Castro is anticipating the LIC to be turned into a premier facility to showcase the sport of wrestling, with the intimate setting — compared to a large convention center — amplifying crowd noise.

"We are hoping it goes well the first year because we're kind of in a trial period," he said. "We have a three-year unwritten contract with the NCWA that we can host it here and we want to renew that."

The six-mat setup will have single mats at either end of the rink and four in a square formation in the middle, which will force teams to sit in the bleachers due to limited flooring space.

"It'll be interesting," Castro said. "We don't know what to expect. In Dalton, the flooring is big enough for eight mats, with chairs on each side. (The tight confines) could cause the environment to be a little more intense."

Tickets for the two-day event are $20 for adults and $10 for students. All of the action will be streamed live by FloWrestling.

Points are awarded to the teams in reverse order of their finish, with 24 given to the overall champion, and will be added to their overall score at the start of the NCWA Grand Nationals tournament set for March 8-10 in Allen, Texas.

"If you're interested in the national championship as a team, you better come to this thing," Castro said, noting the boost in points has had a major impact on previous national championship tournaments. "We're kind of a pilot program for the NCAA, which is trying to push for the NCAA to use this points system as an incentive to get the best teams to its National Duals."

Seedings for the tournament were determined by the teams' national rankings and factor in current records and number of returning national qualifiers and All-Americans.

Emmanuel (Ga.) earned the No. 1 seed followed by Liberty, No. 3 Grand Valley State, No. 4 Apprentice, No. 5 Middle Tennessee, No. 6 Central Florida, the defending National Duals tournament champion, No. 7 Springfield (Mass.) Tech, and No. 8 Penn State.

After receiving a first-round bye, the Flames will face Florida, a team they competed against at the Dec. 28-29 Citrus Invitational, in Friday's opening match at 2 p.m. With a victory, Liberty would take on the second-place team from Pool B that includes Ohio State, Penn State, and MIT. Then it could meet Penn State in Saturday's first match at 9 a.m.

The Flames hope to get things started early from 133-pound freshman Ashton Robinson, 141-pound junior Tyler Sigler, and 149-pound sophomore Brandon Robinson before finishing with strong performances from 197-pound junior transfer Austin Amos, who had an impressive debut at the Virginia Duals, 235-pound senior Charlie Hancock, and sophomore heavyweight Dominick Johnson. In between, Liberty will look to senior captain Josh Ferenczy, who's 19-5 and ranked No. 1 by the NCWA at 174 pounds, to lead the way.

Teams are guaranteed six matches, but must win their first four to reach the semifinals and guarantee a top-four finish.

"I'm glad we're on the other side of the bracket from Emmanuel," Castro said, noting the top seed will face No. 10 Alfred State in its first match, Friday at noon. "We're should be fine going up to the quarterfinals, when we're going to have to start battling. That's when its starts getting really competitive."

To advance to the semifinals and have a shot of extending its streak of top-three finishes at the National Duals to six seasons, "We'll just have to wrestle above ourselves to some degree and to score some bonus points," Castro said.