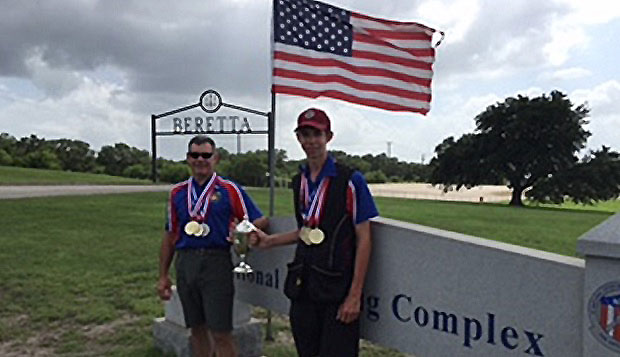 Dave Hartman from Spokane, Wash., officially started last week as Liberty University's first director of the 60-acre shooting center — currently under construction across from the Hydaway Outdoor Recreation Center — and head coach of Liberty's men's and women's shooting teams, which will become the 39th and 40th Club Sports programs when they debut this fall.

"Shooting is a sport that is growing by leaps and bounds," said Hartman, who represented Liberty and targeted potential recruits at the world's largest outdoors show this past week in Las Vegas. "The incentive for me to take the position is actually the big picture. Liberty is a world-class institution, bar-none, and it is building a world-class facility. It is a great honor to be really on the very initial end of it."

Hartman, 55, who learned to shoot at his Indiana high school gun club, has an athletic background. He spent 10 years training as a member of the U.S. Cycling team in Colorado Springs, Colo. He founded and coached the Spokane Area Youth Shooting Team and guided it to the USA Youth Education in Shooting Sports (YESS) national championship in 2015, with his son, Tommy Hartman, now a freshman at Liberty, one of the team's top shooters. His daughter, Caitie Hartman, is also a junior residential student.

"He's going to be excellent from a recruitment standpoint because he's got lots of great connections in the shooting world," said Club Sports Athletic Director Kirk Handy, who has great expectations for the new programs in their first seasons under Hartman. "This is really going to take off and the facility we're going to have is going to be phenomenal."

Phase One of the shooting sports center will be a shotgun area which will include trap fields, skeet fields, sporting clays fields, and a five-stand shotgun shooting area. Phase Two will include rifle and pistol ranges, which will include a biathlon station, as well as the indoor shooting range. Both phases are expected to be completed by early September.

Two disciplines of trap and skeet will include American and International sporting clays and the Flames and Lady Flames will also compete in multiple divisions or rifle and pistol shooting.

"We hope to be very competitive," Hartman said, noting that he expects to send several team members to next year's Association of Collegiate Unions International collegiate clay target championships in San Antonio in late March or early April. "We will be encouraging students to be as well versed and as well rounded amongst all of the different disciplines and then start to branch out into specialties."

He added that "public safety will be paramount, for area police agencies and our students to be able to train and develop their skills."

Various shooting disciplines provide more opportunities than nearly any other sport for participants to compete in the Olympics — including biathlon which combines skiing and rifle shooting, in the Winter Games and nine men's events and six women's events in the Summer Games.

Hartman has a vision to develop student-athletes that can contend for positions on Team USA as well as others who just want to learn how to handle firearms safely and efficiently.

"The main goal is to have well-rounded shooters or those who can be coached into well-rounded shooters," he said. "We'll be recruiting kids from all walks of life who have the desire to go further in the shooting sports worlds. Besides college-level shooting, there is also an international level that dovetails and coincides with the U.S. Olympic Team sport shooting schedule. We hope our program will be able to be a feeder system for the next level."