Flames double up Golden Grizzlies for first sweep of 2017 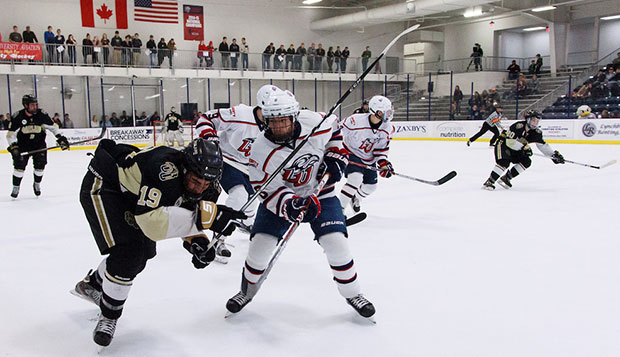 Flames freshman forward Josh Hamilton prepares to check an Oakland player into the boards during the physical clash at the LaHaye Ice Center.

In a physical rematch between Liberty University's ACHA Division I men's hockey team and Oakland (Mich.), the Flames completed their third four-game season sweep of the Golden Grizzlies in the past four seasons with their second 6-3 victory in as many nights, Saturday at the LaHaye Ice Center.

Playing without sophomore Zechariah Roberts, injured in Friday night's opener, and sophomore forward Owen Harris, who was sidelined in the first period of the rematch, Liberty rotated its lineup and put together scoring combinations that worked.

"We had two of our top three centermen out, so we had to juggle lines and I was very proud of our guys," Flames Head Coach Kirk Handy said. "They battled very hard tonight, they were resilient, and they created a lot of great opportunities. Guys like (Grant) Garvin and (sophomore defenseman) Zane Schartz worked hard tonight and (senior goalie) Matt Pinel provided stability back there for us in net. Our penalty kill was 100 percent and that was huge for us tonight."

For the second night in a row, Liberty more than doubled Oakland in shots, 47-23.

The Flames (19-10) got an early spark from Josh Hamilton, who received a centering pass from fellow freshman forward Brock Thompson and lifted a wrist shot from the slot into the upper netting, past Golden Grizzlies goalie Ian Dvorak.

With 7:21 left in the period, freshman forward Cody Clarke dove behind a drawn-out Dvorak to put away the rebound of a shot by freshman forward Jacob Fricks into an open net before leaping into the air in celebration of his second goal in two nights and four starts as a Flame.

"Cody's gotten better every game," Handy said. "His energy is contagious and that empty-net goal at the end just shows the commitment the guy has got to playing the game and the tenacity."

Then, less than two minutes later, with Liberty on a power play, Schartz cleared the puck up ice along the left boards and scored on a sharp-angled shot from the left crease through the five hole for a 3-0 advantage.

As in Friday night's contest, Oakland (5-17-1) ended Liberty's shutout bid late in the first period when Gino Mini's shot from the right point deflected off the skate of Fricks right to left wing Ryan Rotondi for an open-net finish, trimming the deficit to 3-1.

Liberty stretched its lead back to three goals in the opening minute of the second period when Garvin sent a long entry pass from near the Flames' bench that glanced off Mini's stick to Thompson in the right crease where he faked left before deking right and lifting a backhanded shot past Dvorak inside the right post.

"Brock, the last couple games, we've really seen his level of play go up and it's great," Handy said. "We've been really impressed with the way he's been shooting the puck. We want him to be a shooter and he really came to play this weekend."

The Flames extended their advantage to 5-1 by capitalizing on a power play in the final minute of the period when freshman forward Quinn Ryan, who returned from an injury this weekend, gathered a rebound on the left wing, skated in and fired a wrist shot from the high slot through the five hole just five seconds before the second intermission.

The Golden Grizzlies got two goals back in the third period, the first after a skirmish put four players in the box for roughing and Schartz was assessed a second two-minute penalty for crosschecking. Michael MacKinnon's slap shot from the slot slipped past Pinel, cutting Liberty's lead to 5-2. With 1:17 left, Oakland forward Douglas Andrews made it a 5-3 contest by tucking away a backhanded finish off a faceoff in the left circle.

Oakland pulled its goalie to give itself a man advantage for the final minute, but the move quickly backfired against the Flames. Clarke was taken down by a defenseman as he chased down a loose puck to start a breakaway, but got back on his skates to put the finishing touches on the empty-netter and Liberty's sweep of the Golden Grizzlies.

The Flames return to ESCHL action with their third road trip of 2017 next weekend, when they play two games at first-place Delaware on Friday at 9:15 p.m. and Saturday at 5:15 p.m. followed by Sunday's 3 p.m. showdown at Rutgers.