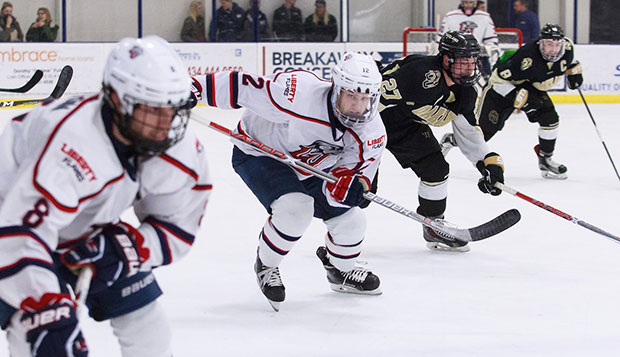 With their parents in town from Canada, brothers Andy and Cody Clarke, freshmen forwards on Liberty University's ACHA Division I men's hockey team, netted a combined hat trick that was the difference in Friday night's 6-3 victory over Oakland, the Flames' first game of 2017 at the LaHaye Ice Center.

"It's a great environment here, I love it," said Liberty junior goalie Josh Halpenny, who started his second game of the New Year and earned his first win since the Fall 2015 semester after recovering from offseason surgery. "We played extremely well. The team came together and worked and fought hard."

"It was a big win to get back on our feet again after the loss to Alabama last Saturday night," Flames sophomore defenseman Kyle Crane added. "Having the fans on our back, too, is a big plus. It helps us, definitely. The guys get more motivated and excited to play in front of them."

"With our team, shots are huge," Crane said. "Putting the puck on net always brings a lot of rebounds and goals for us. It's our best way to generate scoring opportunities."

The Flames needed less than three minutes to start the scoring on a power-play goal by sophomore forward Owen Harris. He netted a wide-open shot top-shelf from deep in the left circle off a fast-break feed from freshman forward Quinn Ryan, who pivoted with the puck as he skated down the slot.

Just 35 seconds later, Andy Clarke pushed Liberty's lead to 2-0 with a wrist shot from out in front. That play was set up by an initial shot from the point by senior defenseman and head captain Ben Hughes before Crane assisted with a feed from behind the right end line.

Andy Clarke stretched Liberty's lead to 3-0 by converting a turnover deep in the Golden Grizzlies' defensive zone into a shorthanded score at the 12:47 mark, catching Oakland freshman goalie Ian Dvorak out of position with a wraparound shot from behind the cage.

"They were both flying tonight," Crane said of the Clarke brothers. "They were on different lines but both brought a lot of spark for us. They bring a lot of energy to the team and guys just feed off of that."

With 7:42 left in the first period, the Golden Grizzlies ended the Flames' shutout bid with a power-play goal off the stick of Douglas Andrews through a screen in front of the goal, with Michael MacKinnon deflecting the puck off the glove of Halpenny into the net.

But Liberty struck even more quickly to start the second period, capitalizing in the final seconds of a power play with 17:27 to go when freshman forward Josh Hamilton set up Cody Clarke's first goal in a Flames uniform with a feed into the left crease from beyond the end line.

Oakland responded less than two minutes later when Andrews caught Halpenny off guard with a putback from a sharp angle on the right side, trimming Liberty's lead to 4-2.

The Flames reopened the three-goal cushion at the 10:35 mark of the second period on a counterattack by sophomore defenseman Zane Schartz. He received a quick outlet pass from freshman defenseman Matt Cruickshank and extended Liberty's lead to 5-2 from a difficult angle deep in the left circle before celebrating with a zany inflatable stick figure impersonation.

The Golden Grizzlies clawed back to within 5-3 with 3:15 left in the period — and five seconds remaining on a power play — when Andrews received MacKinnon's return pass from the back boards and lifted a wrist shot from the left circle inside the right post.

After killing a five-minute major to start the third period, following a fight before the second intermission that also resulted in a two-minute penalty assessed to Oakland, Flames sophomore forward Zechariah Roberts capped the scoring with 4:32 left in the contest. Roberts, who narrowly missed a shorthanded breakaway scoring chance in the second period, controlled the rebound of a shot from the point off the stick of freshman forward Jacob Fricks behind the end line before pushing the puck behind the cage and finishing a wraparound from the left post, bouncing it off Dvorak into the net.

"That was great," Halpenny said. "That was really big for the team, after the three-minute penalty kill at the start of the third period to get going again."

"It was definitely an energy booster," Crane added.

Liberty will look to carry over some of its energy into Saturday night's rematch with the Golden Grizzlies at LaHaye, where the puck will again drop at 7 p.m.