Lady Flames rally to complete sweep of No. 1 RedHawks 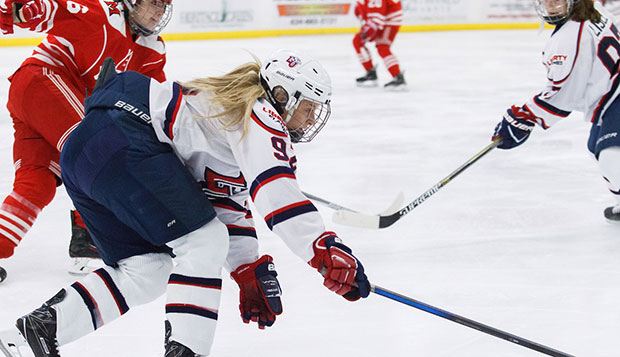 Senior forward Courtney Gilmour skates past a Miami (Ohio) player in the No. 3 Lady Flames' sweep of the No. 1 RedHawks.

Liberty University's ACHA Division I women's hockey team's rematch with Miami (Ohio) University turned out to be just as action-packed and nearly as dramatic as Thursday night's opener.

The defending national champion RedHawks (14-5-2), the No. 1 team in the last three ACHA DI rankings, erased a 2-0 deficit by scoring three goals in the final 10 minutes of the second period. The Lady Flames (16-7-1), ranked third, tied it at 3-3 at the 16:45 mark of the third period and netted the game-winner 10 minutes later for a thrilling 4-3 triumph and series sweep. It was Liberty's 11th victory in its last 12 games and will likely move the Lady Flames into the No. 1 spot for the second time this season.

"It took a lot of work," Liberty Head Coach Paul Bloomfield said. "It wasn't handed to us and I didn't think it would be. When you're in first place, you've got a target on you. With these wins, we'll likely jump into first place and the girls have to understand we're not entitled to be in first place and when we go to nationals, we're going to have to work just as hard as we worked this weekend."

The Lady Flames lost to Miami in overtime in the semifinal round of last year's national tournament after dethroning the RedHawks in the 2015 championship game for their first ACHA DI title.

After being outshot 32-25 in Thursday night's overtime affair, Miami turned the tables on the Lady Flames in the shot department in Friday afternoon's rematch, outshooting Liberty 35-22.

Sophomore forward Lauren McDonald lifted the Lady Flames to a 1-0 first-period lead by capitalizing on a perfectly-played outlet pass from graduate forward Catharine Burrell for a one-on-one finish past Miami goalie Emalee Wills off a secondary assist from junior forward Chelsey Greenwood.

"Burrell had it in the corner and fired a pass and (McDonald) just caught it at the blue line, already behind the defense, and just took it in," Bloomfield said.

Freshman defenseman Emily John stretched Liberty's lead to 2-0 with a perimeter shot set up by McDonald and graduate forward Carrie Jickling with 12:38 left in the second period.

"John fired from the blue line, through traffic in front of the net and the goalie didn't see it," Bloomfield said.

But just like in the opener, Miami stormed back to erase the two-goal deficit, this time scoring three unanswered goals in the second period. RedHawks leading scorer Kaley Mooney got her team on the scoreboard with 8:52 left before Izzy Smith stole an outlet pass and put the puck past sophomore goalie Kelly Hutton into the upper netting from point-blank range, tying the contest at 2-2 with 4:39 to go in the second stanza.

After Lady Flames freshman forward Alex Smibert was penalized for hooking, Miami quickly capitalized on the power play, seizing a 3-2 lead when Ireland Mooney set her older sister Kaley up with a cross-crease assist for a one-timed shot from the left circle.

"They're quick," Bloomfield said. "They've got four or five girls who have really good hands and they're small, tiny, jumping in there. That's how they got several of their goals last night. They're a good team, well coached."

Liberty netted the equalizer when Burrell deflected senior forward and fellow alternate captain Courtney Gilmour's through pass from the top of the right circle through the wickets of Wills.

After John clanged a potential go-ahead shot off the crossbar from the high slot with 9:00 remaining in regulation, McDonald sparked a fast break that led to the game-winner. She sent a short feed to freshman forward Deena Birney for another five-hole finish from deep in the right circle with 6:58 remaining in regulation.

"It was good for our girls," Bloomfield said. "They just kept digging, didn't seem to get down. I knew we could score on them. You've just got to get the lucky bounces on them and you've got to press them. It's not going to be free and it's not going to be easy, but I felt all along that our girls could do it."

Hutton made several critical saves in the closing minutes as her defense helped kill off a penalty with three minutes to go. They formed a fortress around the cage for the final minute and a half when the RedHawks pulled Wills to create a man advantage, and Courtney Gilmour nearly put the win on ice with a shot from the red line that veered just wide of the empty net.

"We had a couple breakdowns, but we were able to pull back together for the third (period) and keep that lead," Lady Flames freshman forward Mackenzie Carroll said. "It showed good capacity of work ethic and our game play to stay up at our level and to match their intensity. We know what we need to work on to get ready for nationals. It gave us good confidence, but now we can't let off the gas. We've got to keep going. We can't give up now. We've got to stay at this level and not drop down."

Liberty will travel to Penn State for 9:15 p.m. games next Friday and Saturday before hosting McKendree in its final series of the regular season in its final preparation for the ACHA DI National Championships early in March.

Bloomfield expects a wide-open field for the eight-team tournament to be played in Columbus, Ohio.

"The whole league's been more competitive this year than I've ever seen it," he said. "The top five teams have kind of cycled and the next five group has cycled. Normally, when they take eight teams there's usually a couple teams that are pretty easy wins and I don't think that's going to be the case this year. Everyone's going to have their hands full."