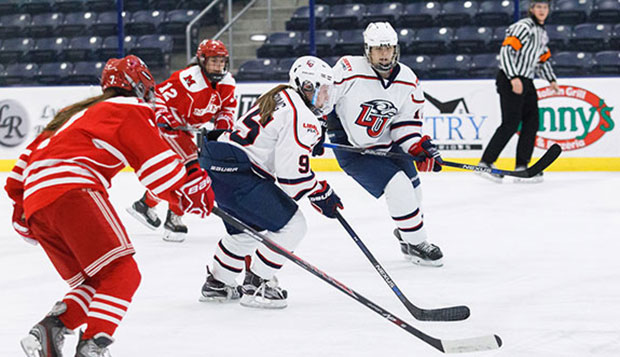 Liberty's fourth-leading scorer on the season, who had given her team a 4-2 lead with 10:31 remaining in regulation, received an assist from graduate forward and team captain Carrie Jickling, the Lady Flames' all-time leading scorer. Now, Greenwood and Jickling share the team lead with four game-winning goals.

"Greenwood's got a nose for the net," Liberty Assistant Coach Justin Forth said. "She's she finds that quiet area between the defensemen and the forwards and she's able to put pucks in the net. She's got a really quick release, keeps it low and finds those tight spots. We really lean on her to lead this young group."

After a scoreless first period, the Lady Flames (15-7-1) finally ended the defensive stalemate with 5:05 remaining in the second period, capitalizing in the closing seconds of a power play when graduate forward Catharine Burrell fed a pass from behind the cage to freshman forward Alex Smibert, who jammed a shot that rolled between the legs of Miami netminder Emalee Wills before trickling across the goal line still on its edge. Burrell, who had circled back in front of the net, threw her glove up in the air in celebration, foreshadowing the Lady Flames' post-game melee on the ice.

Liberty, which outshotthe RedHawks 32-25, started the third period back on the power play and doubled its advantage when Deena Birney unintentionally blocked fellow freshman forward Rachel Gibson's shot from near the blue line along the right boards. But Birney redeemed herself by gathering the loose puck and sliding it through the five hole from the right crease just 48 seconds into the action.

Sophomore forward Lauren McDonald padded the lead to 3-0 with 17:30 to go off a steal from Birney, threading a third score through the five hole with a lightning wrist shot from the inside of the right circle that first split three Miami defensemen.

The RedHawks (14-4-2) got one back in the final 16 seconds of a four-on-three power play when Rachel Booth, the reigning ACHA DI player of the year, put away a puck from the left crease into an open net after Ireland Mooney's shot from the right circle deflected off the skate of Jickling right to Booth with 14:00 to go. Miami trimmed the deficit to 3-2 a minute and a half later with another power-play goal when Mooney's shot from out front tipped off the skate of Tipping inside the right post.

Liberty needed just two minutes to pad its lead back to two goals on a score set up by a spectacular assist from McDonald with 10:31 remaining in regulation. She took control of the puck from a Miami defenseman in the left corner before sending a behind-the-pack pass to Greenwood in the left crease, where she slipped a shot past Wills inside the left post to make it 4-2.

Two minutes after that, the RedHawks cut the gap back to 4-3 when Jordan Hanson scored from deep in the right circle off a short feed from leading scorer Kaley Mooney with 9:28 left. Miami netted the equalizer in the final 1:43 of regulation when Izzy Smith set up Ireland Mooney with an assist from behind the right end line that tipped off Nicole Matthews for a shot out in front.

Finally, the Lady Flames got the game-winner midway through the five-minute overtime period when Greenwood and Tipping launched shots on net before Greenwood recovered the puck beyond the end line. She flicked it back to Jickling before finishing Jickling's return feed from behind the right post with a shot that glanced off the pad of Wills and bounced inside the right post.

"We just got the puck down low, I cycled it down to Carrie Jickling and she just fed me the puck in front and I just tapped it in," Greenwood said, noting that the win was eerily similar to Liberty's back-and-forth 7-6 win over Rhode Island this past Saturday night at home. "It's nice that we can pull together and battle back as a team. Before the game, we said we were going to play for each other. The logo on the front's a lot more important than the name on the back."

"The girls handled themselves very professionally and did a great job battling back and understanding that (in overtime)," Forth added. "It was our game to lose and at that point, they dug deep as a group and were able to finish it off and get the win."

The two teams, who have won the past three ACHA DI titles, with the Lady Flames defeating the RedHawks in 2015 for their first national championship, will go at it again Friday at 2 p.m. at LaHaye.

"We're just going to come out firing like we did today and hopefully, we get another win," Greenwood said after Liberty scored its 10th victory in its last 11 games.

"Same game plan," Forth added. "Take it to them, get them on their heels early, and bury them."