Eagles takes Western riders under wing, trains them to win 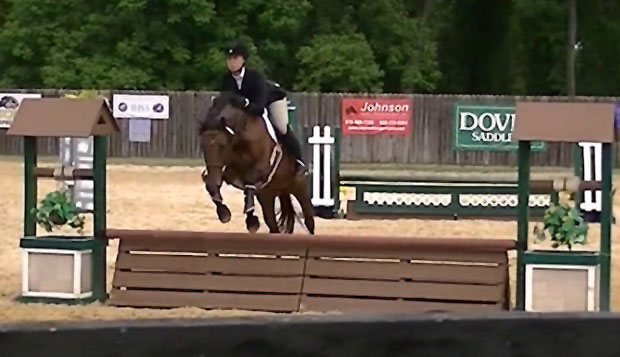 Club Sports Video Coordinator Gabe Henderson interviewed Liberty University equestrian Western team Head Coach Lauren Eagles for this segment of Coaches Club as the team prepares for its first show of 2017, Jan. 28-29 hosted by Campbell University and Virginia Tech in Buies Creek, N.C. (The Hunter Seat squad will also be in action in its last two Tournament of Champions shows this weekend at Bridgewater College and next Saturday at Emory University.)

The Lady Flames' Western team has a few riders who have already qualified for regionals and several more who are on the brink of qualifying, with Eagles expecting to send four onto zonal and national competition for the first time.

"You can never be fully prepared, no matter how much you prepare," she said. "But I texted the girls, sent them emails over Christmas break and said, ‘Don't forget, I need you to be in the gym. I need you to ride as much as you can. It's go time once you get back and we have horse show after horse show. The next thing you know, regionals are here, semifinals, nationals, it just doesn't stop.' But that's what we love about the horse show industry. There are horse show weekends back to back and you go all year round. Now, it's crunch time and I think the girls are ready and it's going to be awesome."

She has helped her riders maintain their spiritual focus going into competitions.

"As the Western team, my girls are very much working on their mental approach. I know they can do it. They know that they could go into every class and win a blue ribbon, but … we had a huge conversation about picking a Bible verse and how it relates to them in the horse show arena. They know their patterns … but their minds are racing and it's been great to see them and say, ‘What's your verse? Why are we doing this?' and to see them take that big breath, and say, ‘OK, now go win a blue ribbon.' And they walk into the arena and I feel like the girls become much more composed and they're not getting in their way as much, so we just want to keep building on that and being smarter athletes and doing what we know we can do."