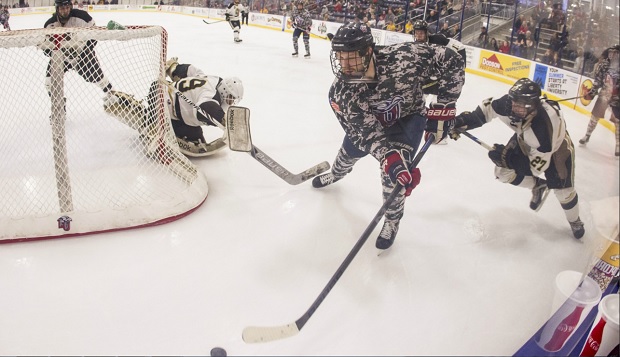 Liberty University's ACHA Division I men's hockey team could be considered road warriors after enduring 10-hour trips to and from Alabama and New York over the past two weekends.

The Flames are battle-tested, but also a bit banged up from the wear and tear of four physical conflicts in hostile arenas. As they adjust to second-semester class schedules and get back into the routine of campus life, the Flames are happy to return to the friendly confines of the LaHaye Ice Center for this Friday and Saturday nights' series against unranked ACHA DI opponent Oakland (Mich.).

"We're looking forward to it," Liberty Head Coach Kirk Handy said. "There has always been a great rivalry between the two programs. Both teams are always competitive. For us, it's all about where we are as a team right now and improving on that and getting better this weekend."

The Flames, who slipped two more spots to No. 21 in this week's ACHA DI rankings, have their work cut out for them to get back into contention to qualify for the March 9-14 ACHA DI National Championships in Columbus, Ohio. Their focus now is on refining their performance on the ice and maintaining their competitive drive over a 60-minute span.

"(Last weekend's split at Alabama) obviously wasn't the outcome we wanted," Handy said. "We've learned from that and we're going to be moving forward. As a group, we could play better and more consistently. For us, that's the big thing. The system's in place, it's more consistency that we're looking for."

Liberty scouting report: The Flames expect to have freshman center Quinn Ryan (Liberty's third-leading scorer with 8 goals and 17 assists), freshman defenseman Garrett Nelson (9G, 11A), and sophomore forward Zak Hayes back in the lineup against the Golden Grizzlies after they missed the trip to Alabama due to injuries. They should help bolster the attack along with steady leadership from junior forward Grant Garvin (15 goals, including four game-winners, 19 assists), sophomore defenseman Zane Schartz (10G, 17A).

In the net, senior Matt Pinel (8-7, 3.24 goals-against average, 88.7 save percentage) posted his second shutout of the season in the opener at Alabama. Junior Josh Halpenny started the first game of the New Year at Stony Brook, which was his first appearance in nearly a year after being sidelined by injury.

Oakland scouting report: The Golden Grizzlies, who have been outscored 105-53 this season, just ended a seven-game losing streak, dating back to its last series against Liberty on Nov. 18-19 in Rochester, Mich., with a victory over Oswego State at ONYX Arena.

All-time series: Since Oakland topped Liberty in overtime of the ACHA DII championship game in 2006, and went on to capture the Division I title the next year when both teams moved up to the ACHA DI ranks, the Flames are 22-13-2 against the Golden Grizzlies. Liberty swept its four games against Oakland last season and previously in 2013-14.

Coaches: Kirk Handy is in his 17th season as Liberty's head coach with an overall record of 363-163-25. In his first season with the Golden Grizzlies, Colin Ronayne is 5-15-1.