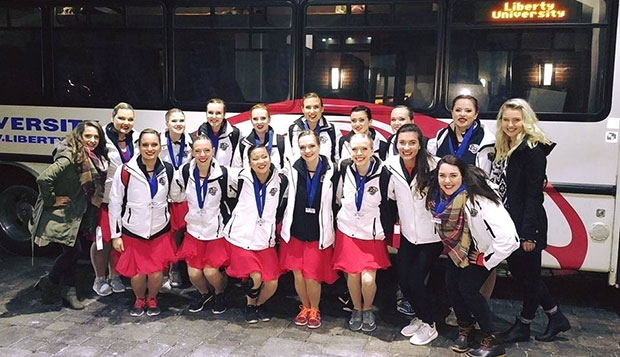 In what may have been its toughest competition of the season, Liberty University's synchronized skating team finished fourth in the open collegiate division of Saturday's Mid-America Synchronized Skating Championships at Fraser Hockeyland in Fraser, Mich.

The Lady Flames took home a pewter medal in a five-team field of colleges and universities (mostly from the Midwest), finishing behind the University of Wisconsin, Miami University of Ohio, and Adrian College and ahead of SUNY-Oswego, the only other team from Liberty's Eastern Sectional.

"We were really pleased with how we performed and placed competing against those top three teams that are big synchronized skating schools," Liberty Head Coach Tatiana Payne said. "Everybody skated very well this weekend. You travel a long way for a three-minute program, but it's all worth it in the end when the girls skate well."

Payne said she and her coaching staff were particularly satisfied with the way the Lady Flames performed considering they were coming off Christmas break on the weekend before Liberty's spring semester started.

"Our team is really unified this year, but we didn't know what to expect from them coming back from a month off," she said, noting sophomore co-captain Katherine Thacker spent part of her break on a mission trip to Israel. "We had high hopes for them coming back for their first competition and they just started back where we left off. They didn't skip a beat. They came back really renewed and refreshed and skated more powerfully and with more confidence than they had before."

"We feel very positive about how sectionals will go this year," Payne said. "We have a week and a half of practices before we head out and there are a couple areas where we hope to improve on. We've had a very strong season and we feel like finishing with a gold medal at Eastern Sectionals would be icing on the cake and potentially put a foot in the door for us to move up to the collegiate level next year."

Competing in the collegiate division would give Liberty the opportunity to advance to the national championships by winning the sectional competition.

"That will fully depend on who we can recruit this year, skaters with junior experience at the higher levels," Payne said, noting the Lady Flames will graduate three seniors and may lose others due to heavy academic course loads. "We're still in the process of looking for four to five solid skaters for next year."