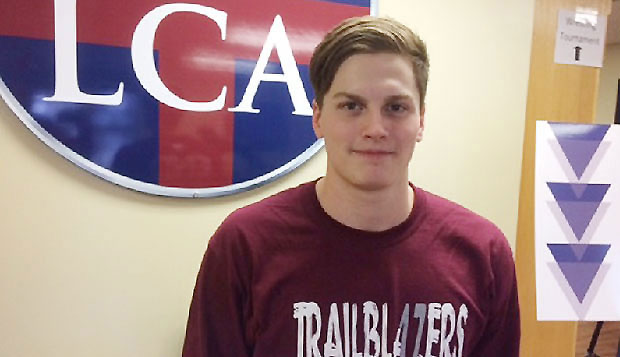 David Schafer will graduate from Liberty Christian Academy this spring before launching his career at Liberty as the first recruit of the new men's swimming & diving team in the fall.

"It's kind of an honor and I'm really grateful that I get to be the first recruit," Schafer said. "I can't wait to swim for Liberty. It's really exciting to be able to swim at an Olympic-sized (50-meter) pool in a brand new swimming facility."

Schafer has shown tremendous potential in the sport that he only started competing in as a freshman at LCA before joining the Lynchburg YMCA team last April and accelerating in his training and competitive level over the summer.

"I've dropped a whole lot of time from when I first started, and then I started swimming for (Lynchburg YMCA) and started dropping more time," Schafer said. "I'm really excited to see where I can end up."

A former track sprinter in the spring and football player in the fall for the Bulldogs, Schafer specialized in swimming as a junior and started receiving recruiting interest from NCAA Division I programs.

"He's a very competitive swimmer at LCA and he's a good recruit," said Spencer, who has already received commitments from at least seven other swimmers. "He's definitely the most competitive we have right now. David and I are on the same level of thinking when it comes to a Division I program and the benefits of being in a Club Sports atmosphere at a school that supports it like Liberty does."

Schafer, who is interested in majoring in Sport Management or Athletic Training, is prepared for the next step in his career as a student-athlete.

"Going from swimming 10 hours a week with the LCA team to swimming 25 to 30 with the Lynchburg YMCA team to transitioning over to the collegiate team at Liberty, it's kind of like a bigger step each time," said Schafer, who is gearing up for his high school conference meet later this month before swimming at the regional meet in early February and the VHSL state championships at the end of February. "It's going to be tough, but it'll be something I can accomplish. It's going to be fun. I'm really excited. I think it'll be a huge difference."

He said having a coach who competed in track & field at LCA and Liberty before joining the Flames' triathlon team as a junior, will ease his transition to the college ranks.

"(Spencer) seems pretty focused on what he wants and seems to be very knowledgeable about the technique and science behind the sports he coaches," Schafer said. "It's pretty exciting to be able to put my trust in someone who knows how to get you to your peak and keep you there."

Schafer's strongest stroke is the breast, with freestyle his second fastest.

"Either way, it will be more oriented to sprinting," he said. "I've been working pretty hard on a lot of my downfalls in my other strokes, like underwater kicking, and I've gone from not being able to do a 100-meter butterfly to being able to do almost a 200 and not fall apart."

This semester, Schafer and his family are hosting incoming transfer Charles Fernandez, who represented Guatemala in the pentathlon at last summer's Olympic Games in Rio. He will compete on Liberty's triathlon and equestrian teams and train in the new natatorium and shooting range, also due to open this fall.

"It's going to be really fun forming a bond, like brothers," Schafer said, noting he may live in the same dorm as other incoming swimmers this fall. "Parker (Spencer) wanted to get us all in the same area on East Campus. That's where the (NCAA Division I) women's team is and that would really help us in building a bond as a team and becoming more like a family."