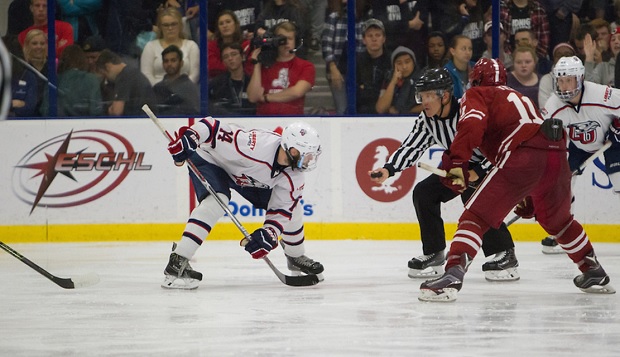 Freshman forward Andy Clarke awaits a faceoff in the Flames' first meeting with Alabama on Oct. 1 in the LaHaye Ice Center.

Liberty University's ACHA Division I men's hockey team's second road trip of the New Year was bittersweet as the Flames settled for their second series split against Alabama this season with a 7-4 setback, late Saturday night at the Pelham Civic Complex.

The Flames (17-10) outshot the Crimson Tide, 43-28, for the game and came out firing on all cylinders before allowing two goals in the first period and four more in the third.

Liberty sophomore Owen Harris ignited the offense on a counterattack with 14:30 left in the opening period, capping the odd-man rush by penetrating into the right crease and depositing his shot past Alabama goalie John Grenier while diving across the goal box.

After nearly 10 minutes of scoreless action, Alabama forward Taylor Joseph lost his stick over the glass on the defensive end, but he picked one up off the bench as he started a two-on-one fast break that produced a shorthanded goal at the 5:00 mark. He skated up the left wing before sliding the puck into the left crease where Jeremy Hannah ended the Crimson Tide's extended scoring drought, beating Liberty senior goalie Matt Pinel to the near post to knot the contest at 1-1.

"That was a big turning point in the game," Liberty Head Coach Kirk Handy said. "We were up, 1-0, and we were on the power play. At that point, I thought we were dominating play. We had outshot them, were winning the time of possession battle. We were all over them."

For Alabama (9-10-2), it was its first goal in four games — a stretch of over 180 minutes dating back to Nov. 20 — and it opened the door for six more scores on the night. The Crimson Tide got another on the board with 1:28 left in the first period when Jack Rooney's shot from the point through traffic veered past Pinel into the upper netting.

In the second period, Dylan Teed scored on a backhanded putback of a shot in the left crease by Marc Demers to stretch Alabama's lead to 3-1.

Liberty sophomore defenseman Zane Schartz had one shot from the right side of the blue line saved by Grenier before finding the back of the net with a second attempt just seconds later from the high slot. That trimmed the deficit to 3-2 with 12 minutes remaining in the second period.

Schartz and freshman defenseman Matt Cruickshank uncorked shots from the point on a power play five minutes into the third period, but the Crimson Tide killed the penalty and Grenier made a glove save of a shot by senior defenseman Ben Hughes moments later. With 11:35 to go, Alabama padded its lead to 4-2 on a second breakaway score, this time a top-shelf backhand by Jeremy Jordan, just his second of the season.

A power-play goal on a slap shot by Rooney in the right circle extended the Crimson Tide's advantage to 5-2 with 8:30 to play before Joseph added an insurance goal for a 6-2 lead on a one-timed shot from around the same spot after intercepting a cross-ice pass.

"One of things we always want to do is win the special teams battle," Handy said. "They scored two power play goals and one shorthanded goal tonight and we scored on just one of our four power play chances. We had opportunities to convert on more than one power play and we weren't able to produce."

After Handy called a time out, sophomore defenseman Kyle Crane capitalized on a broken play in the Alabama end with 3:35 to play. A minute later, Harris netted his second goal on a drive through the left crease to close the gap to 6-4.

But a putback by defenseman Pierre Ouellette in the left crease off a fast-break shot by Hannah put the win on ice for the Crimson Tide, ending its four-game skid.

Liberty will return to action Friday and Saturday nights at 7 p.m. in the LaHaye Ice Center, where the Flames will entertain Oakland, a team they swept up in Michigan before Thanksgiving. They will then travel to Delaware and Rutgers for three Eastern States Collegiate Hockey League contests before closing out their regular season with six home games, starting with a Feb. 3-4 series against Davenport to determine the "Blue & Gray Cup" champion. (Davenport won the teams' first meeting Nov. 17 in Grand Rapids, Mich.)