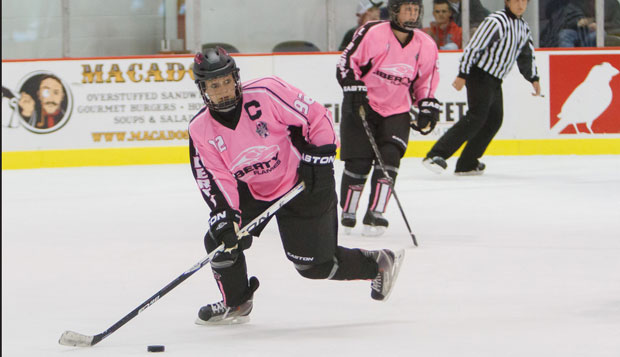 Liberty University women's Division I hockey remains undefeated on the season as the Lady Flames took a pair on the road from the Michigan State Spartans this weekend, 1-0 and 4-2, respectively.

Friday night was a defensive struggle with neither team getting anything on the scoreboard until late in the third period. Both goalies — Samantha Rupp for Liberty and Maria Barlow of the Spartans — shut down numerous scoring opportunities for the opposing team.

Finally, with two minutes to go in the third period, Liberty was able to break through as Carly Peleshok scored the game's decisive — and only — goal.

Rupp battled off Michigan State's attempts at a tying goal, earning her first shutout of the season over the previously unbeaten Spartans.

On Saturday, the Lady Flames jumped on the scoreboard first as Amanda Grainger scored early in the first period. Michigan State would get a pair of goals to take a 2-1 lead, before Liberty captain Stacy McCombe put one in off a pass from Jenny MacArthur to knot the game at two heading to the intermission.

Courtney Fischer gave the Lady Flames the lead for good on a breakaway in the second, beating Barlow to the stick side.

Carrie Jickling would add an insurance goal three minutes into the third period and Rupp would once again stand tall in the net, giving the Lady Flames the victory.

The Lady Flames improve to 7-0 on the season as Michigan State falls to 4-2.

Liberty will head to Owings Mills, Md., next weekend to take on the Stevenson University Mustangs. Game time is set for 5:15 p.m.