Freshmen, Pinel spark Flames to shut out of Crimson Tide 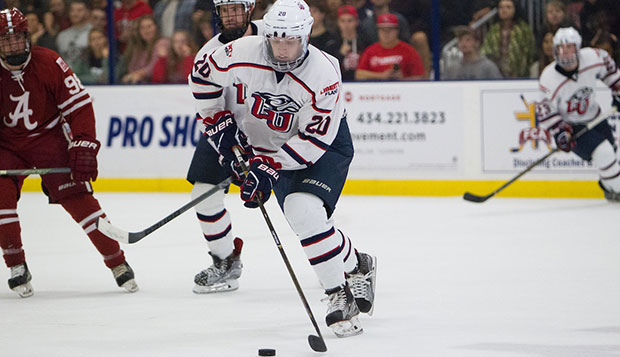 Liberty defensemen Kyle Crane (20) and Ben Hughes push the puck past Alabama in their Oct. 1 game at LaHaye Ice Center.

A change in latitude proved to be beneficial for Liberty University's ACHA Division I men's hockey team as the Flames bounced back from being swept by ESCHL rival Stony Brook in New York last weekend to take the series opener at Alabama, 2-0, late Friday night at the Pelham Civic Complex.

Jacob Fricks scored his first goal in a Liberty uniform with just under four minutes left in the second period, fellow freshman forward Jamie Crane netted an insurance score in the opening two minutes of the third, and the Flames, ranked No. 19 in this week's ACHA DI rankings, stemmed the Crimson Tide on its home ice, maintaining a 37-24 shot advantage.

Senior goalie Matt Pinel (24 saves) posted his second shutout of the season, the third overall for the Flames (17-9), who ended a two-game skid with their seventh win in the last 10 games.

"Matt Pinel gave us great goaltending tonight," Liberty Head Coach Kirk Handy said. "Matt's a guy who battles in practice. He's a leader on our team and it was great to see him get the shutout."

There were only two penalties called in the contest and Liberty did not have a single power-play opportunity, with its defense killing off both of Alabama's man advantages.

"It was a back-and-forth game and there were parts where we had a very solid effort out there tonight," Handy said. "It was a five-on-five game for the most part and our guys battled hard and stuck with the game plan."

Fricks netted the game-winner past Alabama goalie John Grenier with a shot from the left wing into the top right corner of the cage after Crane gathered the rebound of a shot by senior defenseman Ben Hughes off the back boards. That gave the Flames a 1-0 lead with 3:57 left in the second stanza, ending Liberty's 120-minute scoring drought.

"We didn't put the puck in the net for first period and first part of the second, but there wasn't a lot of panic," Handy said. "Jacob Fricks is getting better every time out there and he scored his first goal as a Liberty Flame tonight."

Liberty carried that momentum over into the third period and capitalized on a fast break when Crane received a drop-back pass from freshman forward Cody Clarke and launched a shot past Grenier as he skated diagonally from right to left through the slot.

Clarke was playing in his first game for the Flames after recovering from ACL surgery over the summer.

"Jamie Crane's goal started by a great breakout by Cody Clarke, another guy who, in his first game for us this year, played hard and had great competitive drive when he was out there," Handy said.

Another freshman forward, Brock Thompson, nearly netted a third goal moments later, but his fast-break shot was gloved by Grenier.

"He's coming back from an injury, too, and he's starting to get his legs under him," Handy said.

The Crimson Tide (8-10-2) invited Liberty's players to join them in their huddle for a post-game prayer, which was a highlight of the night for Handy.

"It was a great opportunity to pray with Alabama after the game and we appreciate the opportunity," he said. "That's an important aspect of who we are as a hockey program. It's such a great thing when other team prays with our players and the coaches. That's something that makes this game more meaningful."

The two teams will face off again Saturday night, with the puck scheduled to drop at 11 p.m. EST.

"It was a win that is nice to have, but we came down here to win two games," Handy said. "We've got to get back to the hotel and get some rest and come back out here (Saturday) night ready to go again."

Tune into a live webcast and separate audio broadcast provided by Alabama.