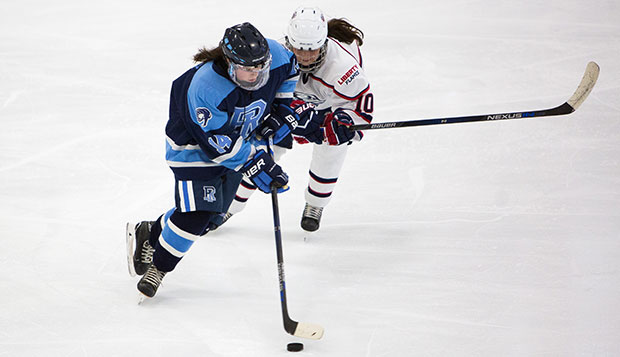 Freshmen forwards made a major impact for Liberty University's ACHA Division I women's hockey team in Friday night's 2017 debut, scoring the first four goals in a 5-1 triumph over Rhode Island at the LaHaye Ice Center.

"We really worked hard," Lady Flames freshman defenseman Emily John said. "All of our lines have finally molded together and we have full freshmen lines and they're totally clicking now coming into the New Year. They worked so well together. We had a full week of practice to get ready and everyone's been so excited to come back."

Vanessa DeMerchant struck first with 7:29 left in the first by one-timing a shot in the left circle past a screen by fellow freshman forward Tiana Lisle and Lady Rams goalie Abigail Torres. That score was set up by yet another freshman forward, Shelby Burden, who stole the puck along the back boards and dug it out of the left corner for the short assist.

Then, with Liberty on a power play after Lisle was tripped up early in the second period, freshman defenseman Rachel Gibson launched a shot from the high slot, blocked by Torres right to freshman forward Deena Birney for a one-timed putback in the left crease with 18:15 to go.

Seconds after the ensuing faceoff, Lady Flames sophomore forward Lauren McDonald made a beautiful move around a defenseman in the left circle before trying to tuck a backhand through the five hole, but Torres stuffed the shot. Less than five minutes later, Mackenzie Carroll sent a cross-crease pass to fellow freshman forward Alex Smibert who lifted a point-blank shot from near the right post into the upper netting for a 3-0 advantage with 13:13 left in the second period.

Midway through the third, Smibert had her shot from the right crease blocked by Torres, but she picked up the rebound and slipped a backhanded feed behind Torres to Carroll for a wide-open, one-timed finish in the left crease for a commanding 4-0 edge with 9:30 remaining.

"Mackenzie Carroll had an awesome goal set up by her linemate Alex Smibert, who played a great game," John said. "That was a beautiful setup. They knew where they were (in the crease)."

Just over a minute later, senior forward Courtney Gilmour finally got a Lady Flames upperclassman on the scoreboard by catching Torres off guard with a fast-break shot off her glove and inside the left post.

The Lady Rams ended the shutout in the final five minutes when Monica Darby set up Casey McCormick for a shot from the left circle that beat Liberty freshman goalie Nadia Rupoli to the top left corner. Moments later, Rupoli snagged a rocket of a shot off the stick of Darby with a high glove save, flaunting her freshman potential in net.

"Nadia was bending backwards today," John said. "She did so well. She was awesome."

The Lady Flames, the No. 3 team in the latest ACHA DI rankings, have enjoyed a long rivalry with the 10th-ranked Lady Rams (13-4). Rhode Island has advanced to 12 of the past 16 ACHA DI National Championships and reached the semifinals eight times without winning a title.

Liberty will attempt to complete the series sweep in Saturday's rematch with the Lady Rams back at the LaHaye Ice Center, where the puck is scheduled to drop at 7 p.m.