Flames regroup, hit the road for rematch with Crimson Tide 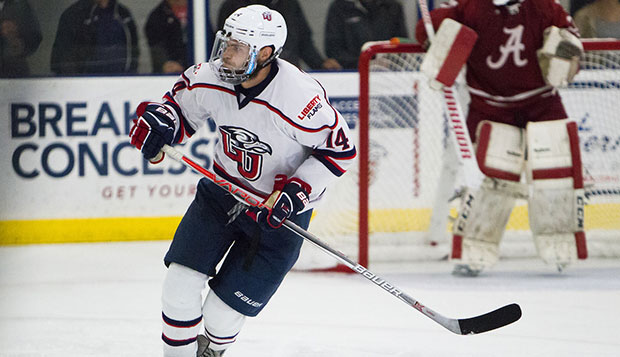 Just three days after driving 10 hours through wintry conditions on its return trip from Long Island, N.Y., Liberty University's ACHA DI men's hockey team will embark on another 10-hour trip, traveling south this time for Friday and Saturday nights' showdowns at the University of Alabama, where temperatures are expected to be in the 70s.

The Flames hope their offense heats up on the Pelham Civic Complex and their defense can stem the Crimson Tide after opening the New Year with back-to-back losses to Eastern States Collegiate Hockey League (ESCHL) rival Stony Brook last weekend, netting just one goal in two games.

"It's going to be a quick turnaround," Liberty Head Coach Kirk Handy said. "We had (Tuesday and Wednesday) to practice to get ready to go. We definitely did improve from the first to the second games in New York and will have to continue to improve our game against Alabama. We're going to have to dig in. We have guys who can get the job done and we're going to run with them."

Liberty, which slipped two spots to No. 19 in this week's ACHA DI rankings, split its series against the Crimson Tide on Oct. 1, dropping the "Midnight Mayhem" matchup, 7-5, before defeating the Crimson Tide in the rematch, 11-2, at the LaHaye Ice Center.

The Flames will look for offensive leadership from junior center and top scorer Grant Garvin (15 goals, 18 assists), who's also featured on a recent "Face to Face" with McKenzie, and sophomore defenseman Zane Schartz (9G, 17A). Sophomore forward Owen Harris (10G, 10A) ranks fourth on the team in scoring followed closely by freshman defenseman Matt Cruickshank (3G, 14A) and sophomore forward Colt Steele (8G, 8A).

In goal, Liberty will rely on senior Matt Pinel (7-6, 3.20 goals-against average, 90.1 save percentage), who relieved junior Josh Halpenny to start the second period of the series opener after he allowed four goals the first period of his season debut last Saturday.

Alabama scouting report: The Crimson Tide had to reschedule last weekend's first series of 2017 against Oklahoma due to a rare snowfall. They have bumped back the start times for all of their home games this season due to renovations at the Pelham Civic Center that have limited availability of the main rink.

Goalie John Grenier has logged the most minutes between the pipes for Alabama, posting a 6-4-2 record with a 4.13 GAA and 86.2 SP.

Series record: The teams split their first series on Oct. 1 and are 1-1.

Coaches: Handy, who is in his 17th season as Liberty's head coach after playing for the Flames from 1995-99, has compiled an overall record of 362-162-25. The Crimson Tide are in their first season under John Bierchen, a former player who is 8-9-2 at the helm.