Men's, women's shooting sports to be introduced in fall 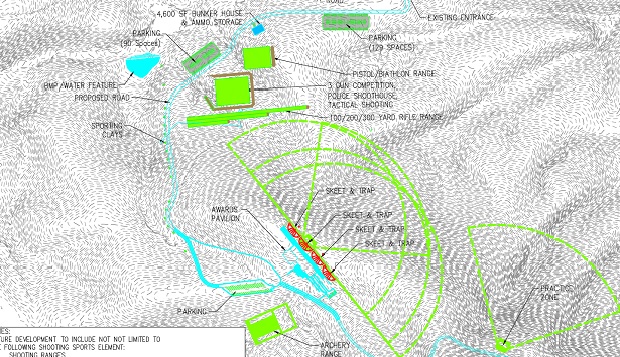 A map of the 60-acre shooting sports complex, located in a 490-acre tract of land in nearby Campbell County, shows the projected layout of the facility where the shooting sports programs will train and host competitions.

Following last week's approval from neighboring Campbell County for a 60-acre shooting range to be constructed on a nearly 500-acre tract of land across from the Hydaway Outdoor Recreation Center, Liberty University's Club Sports department has announced the addition of men's and women's shooting sports, starting this fall.

Construction on the range which will be the first shooting facility on a U.S. college campus to meet all NCAA and NRA specifications for all Olympic shooting sports, will start this month and is due to be completed by early September, soon after students arrive for the fall semester.

"It's going to be a phenomenal facility and one we're excited about," Club Sports Athletic Director Kirk Handy said of the range that will feature an area for shotgun sports (skeet, trap, bunker, sporting clays, and five stand) as well as 100-, 200-, and 300-yard rifle ranges, a pistol/biathlon range, and an indoor shooting range. "We've already gotten a lot of people who have inquired about it. There's a ton of interest and we are really looking forward to starting the program."

A program director is expected to be named this week to allow plenty of time to recruit team members before the various teams begin competing in the fall. Current and prospective students inquiring about joining one of the new should email clubsports@liberty.edu or fill out an interest questionnaire found on the Club Sports website.

Phase 1 of construction on the shooting sports complex, located in a valley of Jack Mountain off Camp Hydaway Road beyond the existing 3D archery range, will be the grading of fields designated for the shotgun sports of trap, skeet, and sporting clays, with an additional area reserved for Five Stand Shotgun shooting. Phase 2 of the project will add the rifle and pistol ranges.

When completed, the shooting sports complex will be open to the public during specified hours. Local law enforcement, as well as Liberty students with concealed-carry permits, will use the facility for training purposes. 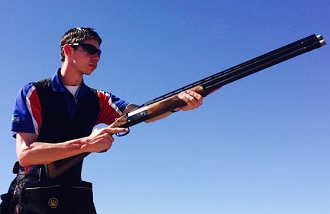 Flames and Lady Flames student-athletes will have the opportunity to compete in the disciplines of skeet, trap, rifle, and pistol shooting, with men's and women's shooting bringing the total number of distinct Club Sports offerings to 40. (Men's swimming & diving was officially announced this month as the 38th sport to debut this fall). The governing body for the various shooting programs will be the Association of College Unions International (ACIA), which holds its national championships each spring in San Antonio, Texas.

College level shooting features a fall and spring schedule that dovetails with competition on an international level and coincides with events coordinated by USA Shooting, the U.S. Olympic Team's governing body. One of the goals of Liberty's Club Sports programs is to train and equip student-athletes interested in competing at the Olympic level.

Shooting sports rank among the most popular Olympic events on a global scale, with so many disciplines for athletes to compete in, including biathlon in the Winter Games. Charles Fernandez, who represented Guatemala in the modern pentathlon at the 2016 Summer Olympics in Rio, has enrolled at Liberty for the spring semester and is planning to compete for the Flames' triathlon and equestrian teams. He will also take advantage of training opportunities at the shooting sports complex as pistol shooting is one of the five events in the pentathlon, along with equestrian, fencing, swimming, and running.