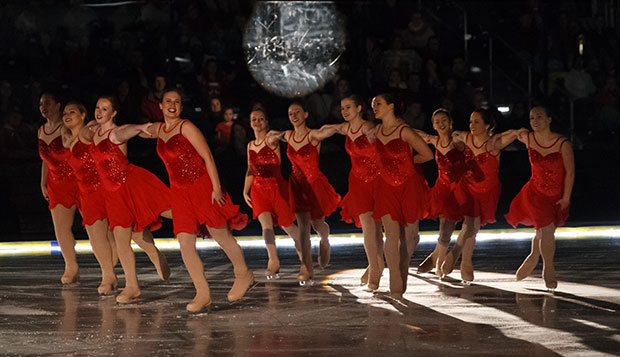 "This year, our skill set is higher," Payne said. "We've brought on some really great skaters, a few freshmen who have just added so much depth to our team. With the drive of the returners and the meshing of the freshmen coming in that are really talented, what we're able to do out there is a whole lot more than what we were able to accomplish last year. They're very consistent and they're able to perform just as well at competition as they are at practice."

After placing second in the Open Collegiate division of the Dec. 3 Terry Conners Synchro Open in Stamford, Conn., and performing the same routine in the Dec. 11 "PraiseFest on Ice: Christmas Edition 2.0" at the LaHaye Ice Center, the Lady Flames will travel to the Mid-America Synchronized Skating Championships in Fraser, Mich., this Saturday and Sunday for what could be its toughest competition of the season, featuring several teams from the Midwest.

"This is our only opportunity to compete against those higher-level teams," Payne said. "If we're able to fare well with these Midwest teams, then I feel like we have a really solid chance of winning at (Eastern) Sectionals. We're in it to win it this year. The girls are really, really competitive and they want to do well and we definitely have all the tools to do well. I really believe in this group of girls that we have and our goal is to medal at the rest of these next two competitions and ultimately to win sectionals."

She said the team is always a work in progress, from the preseason choreography camp in late August to the Eastern Sectional Championships set for Jan. 27-28 in Hershey, Pa.

"I push the team to see how far they can get," Payne said. "We always have room for improvement. Synchronized skating is about being perfect, perfectly in precision, and doing that with 12 girls on the ice all performing the same elements, having their feet be in the exact same place, you're never going to reach perfection. We definitely still have polishing and room for improvement, but these girls want to make it happen. They want to see that improvement, so I have full faith in these girls that we'll be able to accomplish something really great this weekend."