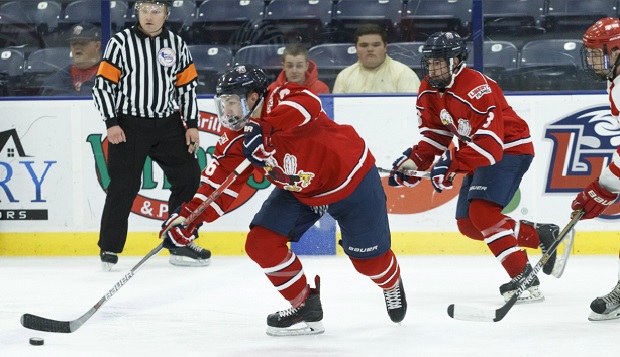 Despite a much higher level of intensity and better overall performance, Liberty University's ACHA Division I men's hockey team suffered its first shutout loss of the season and allowed defending Eastern States Collegiate Hockey League (ESCHL) champion Stony Brook to complete a sweep with a 3-0 victory, Sunday afternoon in The Rinx.

"We have to find a way to generate more offense," Flames Head Coach Kirk Handy said. "It was a better game today, but still not up to the standard that we all expect. One goal in two games is not where it needs to be."

After Liberty killed Stony Brook's first power play midway through the first period, Flames senior goalie Matt Pinel blocked a shot by forward J.T. Hall from the right wing before defenseman Frank Sherding hit the post with a shot through a screen from the top of the right circle seconds later.

Less than five minutes later, Sherding threaded his fifth power-play goal of the season from the top of the left circle past the stick of freshman defenseman Chaydan Lauber and into the top left corner of the cage past Pinel with 5:06 left in the first period for a 1-0 edge.

"Our penalty kill was a lot better tonight Pinel played really, really well," Handy said. "That was definitely a good shot that beat us."

The Flames retaliated with some excellent pressure of their own and prevented the Seawolves from mounting another serious threat. Freshman forward Victor Blomberg came up from Liberty's DII squad to fill in for injured freshman Quinn Ryan and provided a spark on attack.

"Victor played and worked hard for us," Handy said. "His energy was great out there tonight."

In the second period, Liberty had no fewer than four man-advantage opportunities, including a five-on-three for nearly a minute midway through the stanza. The Flames generated a flurry of shots and quality rebound chances, but couldn't capitalize as Stony Brook goalie Payne Yoder stood on his head. Liberty maintained its intensity for the remainder of the period, with a five-on-four power play for nearly three minutes late, but came up empty-handed and still trailed 1-0 going into the third.

"We did have some Grade A opportunities, that's for sure, especially in the second period, when we outshot them, 16-9," Handy said. "We were putting shots on net, but we have to find a way to put those pucks in the net."

Stony Brook extended its lead to 2-0 by taking advantage of a turnover deep in Liberty's zone with 7:17 remaining in regulation when Chris Stemke picked up a loose puck deep in the right circle after a turnover from behind the cage. He skated into the right crease before dishing a backhanded pass to fellow forward Brendan Calello who put the puck top-shelf into an open net.

The Flames ramped up the pressure in the closing minutes and pulled Pinel to create a man advantage for the final minute. However, Seawolves forward Brad Riccardi shook off a sliding save by Liberty freshman forward Andy Clarke and converted an empty-netter with 44 seconds to go.

"The effort we had in the last 10 minutes of the game was strong, but it needs to be consistent," Handy said.

The Flames, who remained in third place in the ESCHL race, one-half game in front of the fourth-place Seawolves, return to the road next Friday and Saturday at Alabama, another team they split two games with at home in the fall, including their first "Midnight Mayhem" contest of the semester.