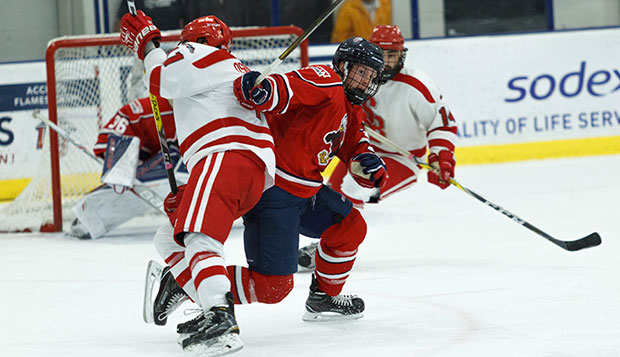 Liberty University's ACHA Division I men's hockey team got out to a sluggish start in Saturday night's opener against Stony Brook at The Rinx, allowing two power-play goals and digging a 3-0 deficit in the first 10 minutes of a 7-1 defeat.

"It wasn't the start we were looking for," Liberty Head Coach Kirk Handy said, after the Flames slipped to 16-8 and 8-4 in ESCHL play. "We gave up three power-play goals, one 4-on-4 goal, and let them score one goal shorthanded. A strength of ours is playing 5-on-5 and we weren't able to do that for much of the night."

Just 37 seconds after the opening faceoff, Stony Brook forward Chris Stemke took advantage of an ill-timed line change that left Liberty shorthanded on defense. He converted a wide-open shot from out in front of the net past junior goalie Josh Halpenny — who was making his first start of the season after returning from injury — to capitalize on a two-on-one counterattack assisted by J.T. Hall.

"The first period, we came out and were making plays that made us look like we hadn't played in a while," Handy said. "Those are things we've got to clean up. We turned the puck over far too many times, a couple times we had too many men on the ice, so one guy jumped off and they were able to score on a two-on-one."

Stony Brook forward Brendan Calello netted the first power-play goal by finishing the rebound of a shot on net by defenseman Michael Cartwright despite being dragged down on the play by Liberty defenseman Jacob Fricks.

Moments later, after another Flames infraction, Seawolves forward Brad Riccardi received an assist from Nathan Richards and squirted the puck through the legs of Halpenny from the right side for a 3-0 lead with 10:28 to go in the opening stanza.

Devon Palmieri put back a rebound of his own shot on goal off a short assist from Richards near the right post extending the Seawolves' advantage to 4-0 with 2:38 left in the first period.

The Flames finally got on the scoreboard with 4:47 left in the second period on a shot from the high slot by freshman center Garrett Nelson that caught Seawolves goalie Payne Yoder leaning the wrong way.

Hall capitalized near the left post a minute after that following a turnover along the boards on transition, pushing the Seawolves' advantage back to four goals at 5-1.

Stony Brook padded the lead to 6-1 less than five minutes into the third period when Stemke, posting up in the right crease, one-timed a redirect of an entry pass from the right circle off the skate of Flames defenseman Zane Schartz into an open net.

A shorthanded breakaway by Brian Boser, who picked up a loose puck off the boards and beat Pinel stick-side with an upper-net backhanded finish, put the Seawolves' victory on ice with 3:45 remaining in regulation.

Liberty, which was outshot 35-26 for the game, applied continued pressure on Yoder, who kept the Flames off the scoreboard the rest of the way. The two teams will meet in Sunday's rematch at The Rinx, with the puck set to drop at 3:30 p.m. The game will be webcast live by Stony Brook.

"We have to put a lot more shots on goal," Handy said. "It was a disappointing effort for us for sure. All of us have to be better (on Sunday). It starts with me and goes down to everyone else. We have a high standard for our team, which is great. We didn't get to that standard tonight. We have to be better, plain and simple."