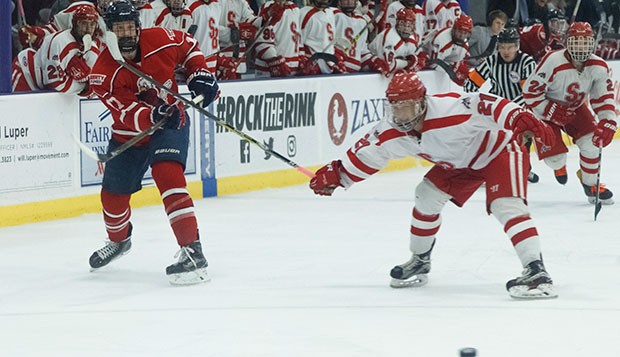 Liberty junior forward and ESCHL leading scorer Grant Garvin launches a shot during the Flames' 3-2 overtime win over the Seawolves on Nov. 4 at the LaHaye Ice Center.

As they travel to defending Eastern States Collegiate Hockey League (ESCHL) champion Stony Brook for this weekend's series at The Rinx on Long Island, Liberty University's ACHA Division I men's hockey team is in the thick of the chase for the ESCHL regular-season title — and an autobid to the ACHA DI National Championships.

The Flames (16-7) enter the home stretch in third place in the league standings, behind Delaware (18-5) and Rhode Island (13-4) and ahead of the Seawolves (11-7-2), who they split two tight games with in early November at the LaHaye Ice Center.

This will be Liberty's only trip to New York this season, and the fourth consecutive year it has started second-semester action at Stony Brook. (Next year, the Flames will make two trips to the Empire State with the addition of New York University and Syracuse University to the ESCHL for the 2017-18 season, expanding the league to eight teams.)

Head Coach Kirk Handy has worked his players hard this week in preparation for their first live action in four weeks, with one practice on Monday, two on Tuesday and Wednesday, and one more on Thursday before traveling Friday.

"Our energy level's been good this week and I think guys feel refreshed and ready to go," Handy said.

The Flames will reintroduce junior goalie Josh Halpenny, who has been sidelined by injury since last season, into the rotation in net.

"We'll wait and see, but I think he's going to play Saturday night," Handy said. "Josh has been battling for us for the last couple years and he is a key part of our team on and off the ice."

Halpenny is excited to get back in the cage, especially playing in New York.

"I've played there a couple times before and I've always enjoyed it," he said. "Stony Brook's a good team, so it will be a good test for me. I'm really looking forward to it now that I'm back to 100 percent."

This is the first of three road trips the Flames will take in January, with a long journey to Alabama set for next weekend and a return trek up North to play at Delaware and Rutgers on Jan. 27-29. Handy said they couldn't come at a better time for the team to strengthen relationships and continuity as they gear up for a postseason run in February.

Liberty scouting report: The Flames ended 2016 by winning six of their last seven games after losing five of seven during a rough stretch in November. They have already eclipsed their total wins from 2015-16 by four games.

Sophomore forward Owen Harris (10G, 10A) ranks fourth while freshman forward Garrett Nelson (8G, 11A) has netted the most power-play goals (six), scoring on exactly half of his 16 shots taken.

Freshman defenseman Matt Cruickshank, who is featured in a photo accompanying a story about the growth of the ACHA posted on its website, is the team's sixth-leading scorer (3G, 14A).

Stony Brook scouting report: The Seawolves are 8-1 this season on their home ice, where they have outscored their guests, 58-19. Stony Brook graduated three of its top four scorers (all but reigning ACHA player of the year JT Hall, who totaled 124 points) and has not been nearly as dominant as last season, when it finished 28-2-2.

All-time series: Even after losing six of the past seven matchups, Liberty still leads the series with Stony Brook, 20-11-3.