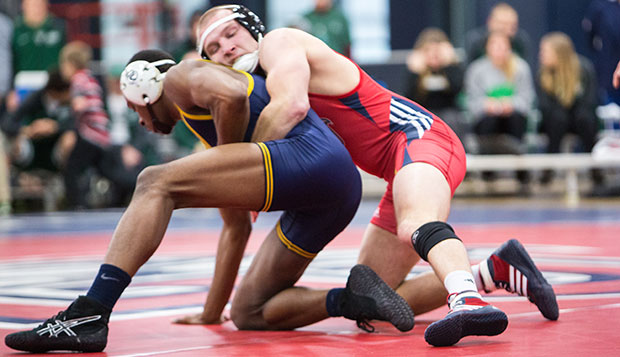 "We had four injuries — two guys in slings (junior 141-pounder Tyler Sigler and senior 165-pounder Patrick Scarborough), another on crutches (junior 197-pounder David Smith), and one limping," Flames Head Coach Jesse Castro said. "So we lost a lot of potential points by medical forfeit. Hopefully it won't cost them too much time off the mat."

Ferenczy suffered both of his losses to the same opponent, Wisconsin-La Crosse's Sean O'Neil, 5-1 in the championship quarterfinals and 3-2 in double overtime in the consolation final. Between those matches, he pinned two opponents and scored a 14-8 decision over Wisconsin-La Crosse teammate Sawyer Massie.

"Taylor did a good job, too, and showed a lot of fortitude in the wrestlebacks," Castro said.

Four of the 14 wrestlers Liberty entered into the tournament had to withdraw with medical forfeits on the first day and four individuals advanced into Friday's championship and consolation brackets. The Flames placed eighth out of 12 mostly NCAA Division III colleges and universities in the final standings with 51 points.

"It actually was a tougher tournament than it normally is with a few new teams coming from Minnesota, Ohio, New York, and Wisconsin-La Crosse," Castro said. "Augsburg ranked eight, ran away with it."

Those wrestlers eliminated before the finals or consolation rounds still had an opportunity to compete in an unofficial consolation bracket to give them more match experience before the New Year.

McIlhenny won three straight matches at 184 while freshman Andrew Burgette won four straight at 157 after being eliminated in the consolation quarterfinals.

"As the tournament went along, the guys wrestled tougher," Castro said. "There was a big improvement on the second day. You could tell the guys were getting in better shape, too."

He would like for the Flames to be back to full strength in time for the Jan. 13-14 Virginia Duals in Hampton, Va.

"That's a very prestigious tournament and we were hoping to be peaking going into it," Castro said. "Now, we'll need some miraculous healing for that to happen."