Skaters second before dazzling crowd at PraiseFest on Ice 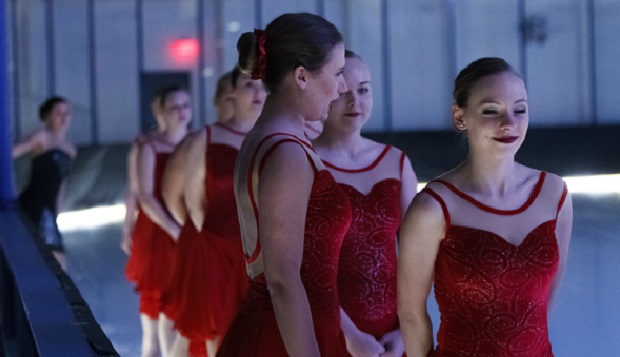 Members of the Liberty University synchronized skating team got into the Christmas spirit over the first weekend of December by traveling through New York City en route to their first multi-team performance, the Terry Conners Synchro Open in Stamford, Conn.

"Everybody seemed to have a really good time," Liberty Head Coach Tatiana Payne said, noting the Lady Flames' figure skating team also came along for the ride and enjoyed the experience of skating in Central Park, visiting Times Square, and seeing the Christmas tree at Rockefeller Center on a Friday night, two days after it had been lit on Nov. 30.

The whirlwind tour set the stage for Liberty to compete in the Dec. 3 Synchro Open, where the Lady Flames placed second out of five teams in the Open Collegiate division, behind only Boston College.

"There were three teams that medaled at Eastern Sectionals last year, so for us to (place second) was kind of a surprise for the other teams," said Payne, who selected the music for the routine from upbeat love songs from the 1970s.

"If they had skated their best, and skated a clean program, they probably would have placed first," Payne said, noting Liberty still received two first-place votes from the judges.

It was technically Liberty's second competition after it traveled to the Carolina Synchro Classic on Nov. 12, when it was the only Open Collegiate team to show for the judges.

"Everywhere we've gone, we've gotten positive feedback from all the other coaches and the judges so it's been really encouraging," Payne said. "This is the best team we've ever had and our team as a whole is really hungry to win sectionals."

Both members of Liberty's figure skating and synchronized skating teams participated in the eighth-annual "PraiseFest on Ice: Christmas Edition 2.0" at the LaHaye Ice Center.

Including both teams and their respective coaches, outside performers, and Learn to Skate participants, the second Christmas production featured 17 acts in addition to an opening number and finale with the total cast of more than 60 skaters. The show was attended by more than 750 people.

"One of my favorite performances of the evening was (sophomore co-captain) Cami Burkhardt skating to ‘Ave Maria,'" Payne said. "She's definitely one of the most graceful skaters on the team."

The overall performance quality of the show was enhanced by guest performances from Jaqueline Zimmerman, a College of Charleston graduate who is auditioning for a professional show tour, and Brynne McIsaac, who represents Team USA on the Junior Grand Prix tour.

Zimmerman is also considering graduate school at Liberty, where she could still compete for the Lady Flames while pursuing a master's degree in sports psychology.

McIsaac, who will perform the same routine at a Christmas show in Alexandria, Va., out of the rink where she has trained with her coach, Shirley Hughes, for the past 11 years, is looking forward to joining the Lady Flames in the fall.

"All the girls on the team are just amazing, I love them so much," she said. "They're just really amazing people and I love hanging out with them."