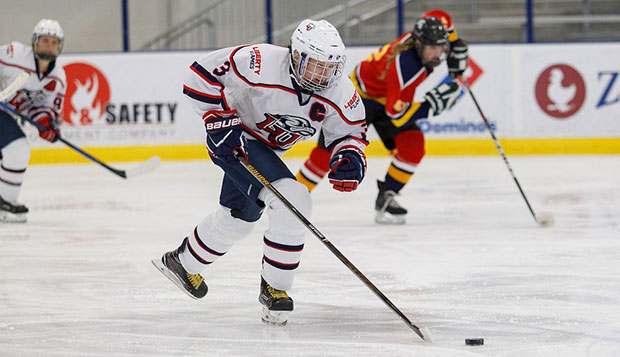 Liberty graduate forward and captain Carrie Jickling works the puck up ice against the Chesapeake Bay Lightning on Saturday.

After slipping two spots to No. 3 in the national rankings following last weekend's split with Lindenwood Belleville, Liberty University's ACHA Division I women's hockey team got back on the winning track, Saturday and Sunday at the LaHaye Ice Center, with 5-3 and 6-2 victories over the Chesapeake Bay Lightning, a Mid-Atlantic Women's Hockey League (MAWHL) team from Maryland.

The reason he agreed to add the Lightning to the schedule this year was that he didn't want the Lady Flames — who have played 18 games over the past 10 weeks — to experience another five-week idle period, as they did the first month of the fall semester, heading into the Christmas break.

"Our girls had a lot on their plate this week with finals coming up (but) if we hadn't played this weekend, it would have been five weeks before we played again (Jan. 13-14 at home against Rhode Island)," Bloomfield said. "So we did it for their conditioning and so they don't get rusty. They're just starting to figure each other out with all these freshmen, gaining the experience, camaraderie and chemistry we need going in to the second semester."

Liberty leaped out to a 3-1 lead by the end of the first period in Saturday afternoon's opener. Freshman forward Shelby Burden started the scoring five and a half minutes after the opening faceoff, finishing an assist from freshman defenseman Holly Turner. Chesapeake Bay tied it up with 7:50 remaining in the period before the Lady Flames responded 14 seconds later when freshman forward Vanessa Demerchant scored off feeds from junior defenseman C.J. Tipping and freshman forward Aly Morris.

Then, with 5:46 left in the first, head captain Carrie Jickling pushed the lead to two goals off an assist from fellow graduate forward Catharine Burrell, her alternate captain.

The Lightning struck quickly in the second period, trimming the deficit to 3-2 with a power-play goal before tying it up 10:58 before the second intermission.

It took Liberty less than two minutes to seize the lead for good when freshman forward Alex Smibert netted the game-winner on a power play with 9:05 left assisted by Burrell and Jickling. Just 33 seconds later, the Lady Flames capped the scoring when freshman forward Tiana Lisle put away a pass from Morris.

As he did in Sunday's rematch, Bloomfield rotated all three goalies against the Lightning — starting junior Rosie Kelly before putting sophomore Kelly Hutton in for the second period and replacing her with freshman Nadia Rupoli for the third.

Rupoli didn't allow a goal in the last period of the opener before Kelly shut Chesapeake out in the first period of the rematch, when Liberty finally ended the scoreless tie with 4:03 to go on a goal by freshman defenseman Rachel Gibson off assists from Smibert and Jickling.

The Lightning again tied it up, with another power play goal midway through the second period, before the Lady Flames broke the 1-1 deadlock with 18:02 left in the third period on a goal by freshman defenseman Dana McLeod, assisted by Morris.

Then, 23 seconds after the ensuing faceoff, Morris extended the Lady Flames' lead to 3-1 off an assist from Lisle before freshman forward Emily John pushed it to 4-1 by finishing a feed from Jickling two minutes later.

Chesapeake netted another power-play goal at the 11:25 mark before Liberty got it back a minute and 20 seconds later when senior forward Courtney Gilmour converted assists from Jickling and Burrell.

Finally, Tipping tipped the scales in the Lady Flames' favor with her score off assists from John and Demerchant with 3:37 remaining in regulation.

Liberty outshot the Lightning, 40-25, with Hutton and Rupoli allowing one goal each.

"We had to be pretty careful because they had a couple really good players," Bloomfield said. "We played well, and were able to outplay them. It was good to get the wins under our belt, even though they don't count toward our league record, just to keep them on the ice and keep them in shape and working on our systems."

"Certain teams we have a little more of a rivalry with than with others," Bloomfield said of Rhode Island, which was once the dominant team in the ACHA, and the RedHawks, who have won two of the past three national titles with Liberty winning the other.

The Lady Flames have only eight regular-season games remaining before heading into the ACHA national tournament in Columbus, Ohio, set for March 15-19.