No. 1 Bobcats edge out Liberty 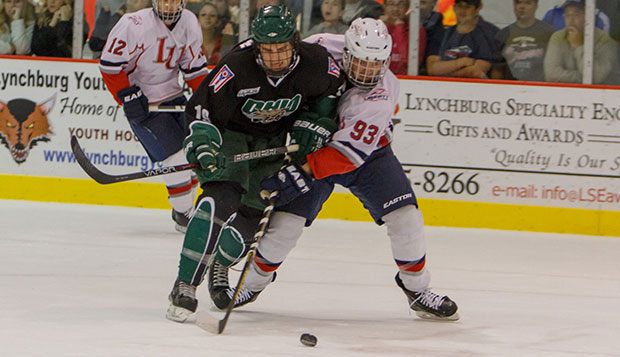 The Liberty Flames Division I men's hockey team faced off against No. 1 ranked Ohio University at the LaHaye Ice Center Friday night, falling short to the Bobcats 3-2, bringing its current streak to six-straight losses.

The Bobcats struck first three minutes into the game as Nathan De La Torre scored his third of the season off an assist from Nicholas Hudeck. Eight minutes later Ohio increased its lead to 2-0 when Hudeck put one in off an assist from Michael Harris.

Cam Bakker got the Flames on the board with five minutes to go in the opening frame off a pass from Rick Turner on the power play, cutting the deficit in half at 2-1.

Tom Whetsel regained the two goal spread for Ohio as he managed to sneak one past Flames goaltender Blair Bennett, giving the Bobcats a 2-1 lead two minutes into the second.

Turner brought the Flames back to within one midway through the second period off an assist from Kyle Garcia.

Both teams had numerous chances in the third, including a McCombe shot that rang off the crossbar with 30 seconds remaining, but the Bobcats were able to hang on and get their 11th straight victory.

Fedor Dushkin made 32 saves to get the win, while Bennett took the loss with 26 saves.

Liberty will get another shot at the Bobcats Saturday night. Puck drops at 7 p.m.