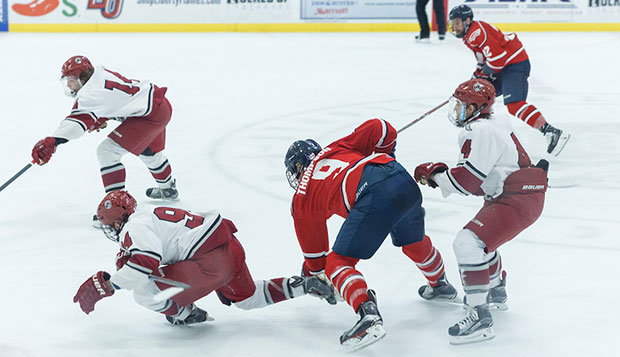 "It was an exciting finish and it was a mental grind, that game," Flames Head Coach Kirk Handy said. "We liked the way we were playing. The hard part sometimes as a coach is you see things that you like and you tell the guys to continue to battle and continue to do the right things and, to our guys' credit, we did and we stuck with it."

After outshooting IUP by more than a two-to-one margin in the opening 5-2 victory, the Flames took 23 shots to just one for the Crimson Hawks in the first period, but couldn't get any of them past goalie Robbie Stock. For the contest, Liberty outshot IUP 66-27, finally ending the shutout with 3:36 left in the five-minute overtime when sophomore forward Zane Schartz one-timed a wrist shot off a rebound on three-on-two break deep in the Crimson Hawks' defensive zone.

"Zane's been a timely player for us this semester," Handy said. "He's become a reliable guy for us back there and someone who scores a timely goal for us there to win the game. He played a great game for us.

"Hats off to IUP, they played very well," he added. "Their goalie stood on his head tonight with 66 shots on net. Stuff like that, that's a good character win for our team and I'm just happy with the guys' effort."

The game remained tied through the first two periods with Liberty sophomore Blake Scott withstanding a flurry of IUP shots in the closing seconds after an odd man rush.

A rugby scrum broke out around the cage after sophomore Owen Harris' shot from the top of the right circle was blocked by Stock, junior forward Grant Garvin whiffed on a putback chance in the open left side of the net and the Flames crashed the goal as sophomore forward Zak Hayes dove to try to jam in the follow of his shot from the right crease.

With six and a half minutes remaining in regulation, the Crimson Hawks got a breakaway and forward Leo Blore, who went over 100 penalty minutes for the season in Saturday morning's opener, was denied by Scott and followed through on his shot by ramming him into the left post. Scott responded by diving on top of Blore behind the dislodged cage and both were given two-minute roughing penalties.

"Blake played well," Handy said. "That's a tough game for him to play in. The shots are so one-sided and the play's so one-sided. I was proud of the way he battled tonight."

After Scott glove saved a shot by IUP forward Joey Keenan with 12.6 seconds left in the third period, the Flames nearly won it on a two-on-one break before the buzzer. Freshman forward Quinn Ryan sent a fast-break feed to sophomore forward Colt Steele in the left crease where he had his one-timed shot rejected by a spectacular save by Stock.

In overtime, after Stock stopped a driving shot by freshman forward Josh Hamilton, Schartz netted the game-winner by capitalizing on a loose puck off a rebound in the left crease.

"It was a transition in the neutral zone and we had a three-on-two rush with me, Garvin, and Owen (Harris) and Owen made a nice play to the net," Schartz said. "Garvin went wide and cut to the middle and Owen got a shot off and (Stock) blocked it and it just kind of popped out to me on my stick and I tapped it home top-cheese."

"We were just putting pucks on net and hoping one goes in and it bounced our way," Handy added.

The sweep improves Liberty's record to 16-7 before the Christmas break, and was satisfying even though it was more exciting than the coaching staff would have liked.

"We're happy with the victory, but we're not satisfied with the score of the game," Schartz said. "It's a process and we played really well. We had a lot of shots and pressure in the offensive zone, but, obviously, we weren't very happy with not putting more goals on the board. We're not going to be upset with a win, but we want a bigger spread the next time we play them."

Handy hopes the Flames can maintain the momentum of winning five of their final six games of the semester well into the New Year, so they can be recharged to make a solid push toward an ACHA postseason bid.

"The break comes at a good time," he said. "Our guys need to focus on exams now and be ready to go for Jan. 2 when we start practicing again."

Liberty will travel to Stony Brook to open the second semester on Jan. 7-8.