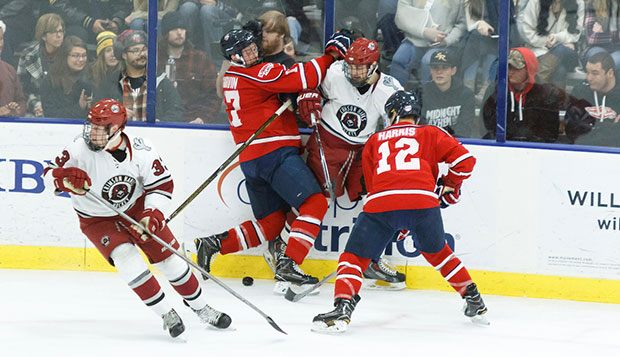 Liberty forwards Grant Garvin (17) and Owen Harris (12) collide with IUP players against the boards as they battle for the puck during a 'Midnight Mayhem' clash at the LaHaye Ice Center.

Five days after allowing Rutgers to score five unanswered goals in a 5-3 loss on the road, Liberty University's ACHA Division I men's hockey team overcame a 1-0 deficit with five consecutive goals of its own in a physical 5-2 "Midnight Mayhem" victory over Indiana University of Pennsylvania, early Saturday morning at the LaHaye Ice Center.

The Crimson Hawks (5-11-1) struck first on a power play with just under 14 minutes left in the opening period when Reid Duguid, IUP's leading scorer on the season, received a cross-ice pass from fellow forward Mike Longhitano on transition and launched a wrist shot from the top of the left circle through traffic past Flames senior goalie Matt Pinel top shelf.

"Quinn's really coming into his own and he's a guy who — you saw it tonight — he's got another level to his game," Flames Head Coach Kirk Handy said. "He had a big game for us again tonight. He's grown into his role with us and I expect big things from him."

With 7:45 left in the first period, Liberty freshman forward Quinn Ryan netted the equalizer after receiving a pass down the center of the ice from freshman defenseman Jacob Fricks. He made a spectacular move to skate through three IUP defensemen before depositing a backhanded shot through the five hole of Crimson Hawks goalie Robbie Stock.

Liberty (15-7) seized a 2-1 lead with 11:38 left in the second period when Ryan sent a pass from deep in the right circle across the crease to sophomore defenseman Zane Schartz in the top of the left circle, where he rifled a beautiful shot into the upper netting.

"With 15 freshmen, it's a pretty young team and all the boys are contributing as well as they can," Liberty freshman forward Josh Hamilton said. " (Ryan) stood out among all the freshmen. He had a great game, a very unselfish game."

Then, directly off a faceoff won by Basil Reynolds on the offensive end, fellow Flames freshman defenseman Matt Cruickshank lifted Liberty to a 3-1 lead with a one-timed shot from the high slot.

"That was a nice goal," Handy said. "We win the draw, (sophomore defenseman) Kyle Crane ties up (Cruickshank's) guy and he's able to bury on that nice shot."

The Flames added two more scores in the final two minutes of the second period. Soon after a successful penalty kill, sophomore forward Zak Hayes received a pass dropped back by freshman Brock Thompson in the top of the left circle and sent a wrist shot through a screen in front of the cage that Stock couldn't quite catch.

Then, with Liberty on a power play in the final six seconds, it took a commanding 5-1 lead into the second intermission when sophomore forward Owen Harris received a fantastic feed from Ryan, who deked around a defenseman in the left circle before assisting Harris near the left post. Ryan then maneuvered the puck around Stock and threaded his shot into the lower left corner of the cage.

"It's nice, definitely, to come back in the second period and bang a couple in," Hamilton said. "It really boosted the boys up going into the locker room and on the bench."

IUP got one goal back when forward Nick Gray chipped a rebound up and over the shoulder of Pinel, who had poked the puck out front after saving a shot from the slot. That was all the Crimson Hawks would get as the Flames held on for three-goal victory and maintained a 40-19 shot advantage.

"The big thing is we can't be satisfied with this game," Handy said. "We didn't play the way we wanted to for 60 minutes tonight so (Saturday) we're going to come back out and go back at it again. We'll be ready to go."

Liberty will host the Crimson Hawks again Saturday at the LaHaye Ice Center, where the puck is scheduled to drop at 7 p.m. The three new members of the Club Sports Hall of Fame will be honored between periods.

"We still haven't played our best hockey yet and when we get to that point, we'll be good," Hamilton said. 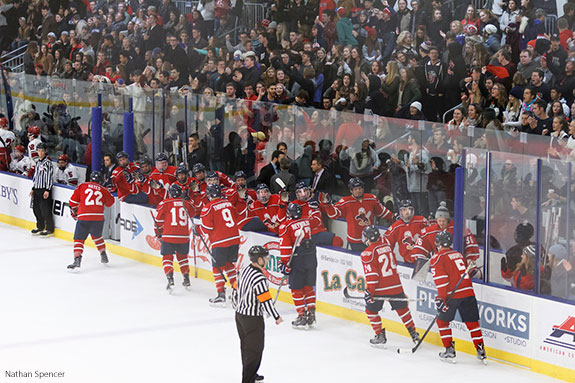