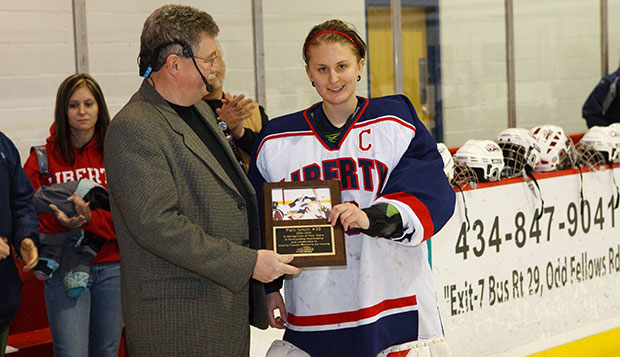 Patti Smith receives an award from Lady Flames Head Coach Paul Bloomfield on Senior Night at the LaHaye Ice Center for being a four-year Academic All-American.

Before becoming Liberty University's first female athlete to be inducted into its Club Sports Hall of Fame, Patti Smith helped make a name for the Lady Flames' ACHA Division I women's hockey team as a four-year starter in goal from 2006-10.

"She was the first girl I recruited and her story's amazing," said Paul Bloomfield, Liberty's 10th-year head coach who will share it tonight as Smith's presenter at the third annual Club Sports Hall of Fame induction ceremony, set for 6 p.m. at the Hancock Welcome Center.

Smith played more minutes than any goalie in Liberty women's hockey history and posted more wins (42) than any other netminder to date, with an equally impressive 94.0 career save percentage. She also set a team standard by making 69 saves in one game, a 2-1 loss to the University of Virginia.

"She just stood on her head," Bloomfield said. "She was an outstanding goalie. There were a couple years when we didn't even have a backup and our team wasn't very strong, so she was just in there and she kept us in a lot of games."

After going 6-7 in her freshman season in 2006-07, with only 13 players on the roster, the Lady Flames went 25-7-1 during Smith's sophomore year, qualifying for the ACHA National Championships for the first time and placing fourth. Liberty finished 72-47-14 for her four-year career.

"The best part about being a goalie is you can be a difference maker, no matter what's going on," Smith said. "The four years I was there, it was incredible how the program grew. I'm glad I was able to make a difference in the way that I did. We were winning, the school was really getting behind us, and we were serious about being competitive."

As phenomenal as she was athletically as a goalie, she was even more impressive academically, earning first-team Academic All-American honors all four years.

"Schooling's always been my No. 1 focus and I'm thankful to have it as part of my life again," said Smith, who recently completed her master's degree in research psychology at Trent University in Peterborough, Ontario, and is applying to medical schools to pursue a career in the field of neurology.

She said playing hockey provided the stress relief she needed to thrive as a student at Liberty.

"I love school and academics, but it's nice to have athletics to balance it out, especially now that I'm back to my high-stress studying," Smith said. "Playing hockey helped me with my time management. You don't have time to procrastinate because you had to get your homework done. Plus, I really enjoyed having a physical and competitive outlet. It gives your brain a break."

In 2011, a year after graduating from Liberty, Smith suffered a brain injury in a car accident, setting her back significantly in her studies.

"I had to take a year off from everything and it took me about three years of rehabilitation to relearn how to read," said Smith, who proved her doctors' prognoses wrong by completing her master's degree. "God's got a plan for me, and He's not going to take it away from me. Doctors and specialists have been astounded that I've been able to overcome and achieve."

She is determined not to let the accident derail her dreams of becoming a doctor and helping others dealing with brain trauma.

"It's amazing how things that were meant to destroy you, God is able to turn into something good," Smith said. "We need doctors that really care about people and the accident has given me more passion and purpose."

She's even returned to the rink to renew her career in the cage, both as a player and instructor.

"I finally got back onto the ice a couple years ago, which was exciting, and I got to play Senior ‘A' hockey again," said Smith, who also volunteers as a goalie coach for the Peterborough Ice Kats. "That's one of my favorite ways to give back, an incredibly rewarding part of my life."

Some of her best memories from her playing career at Liberty were the extensive road trips with her teammates packed into mini-buses, often stopping at historical sites along the way.

She traveled with her parents down to Liberty from Elmira, a small Mennonite town near Toronto, to attend tonight's induction ceremony, her first trip back to campus since graduating in 2010.

"I can't wait to see how much it's changed," she said. "I'm excited to see the new (renovated LaHaye Ice Center) rink, and to hear how the team won nationals (in 2015)."