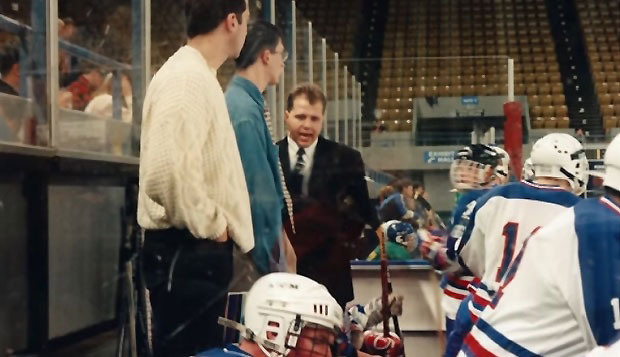 Corrado Puglisi (right) coaches the Flames during a game at the Roanoke Civic Center, their home until the 2006 opening of the LaHaye Ice Center.

Perhaps no coach or player other than Kirk Handy has had a greater impact on Liberty University's five ACHA men's and women's hockey teams than Corrado Puglisi, the former Division II men's coach (1994-99) who will be one of three members to be inducted into the third class of the Club Sports Hall of Fame, this Friday at 6 p.m. in the Hancock Welcome Center.

McGibbon considers Puglisi the leader of the second of three generations of Liberty Hockey coaches, with Dr. Gary Habermas — who was inducted into the Club Sports Hall of Fame's inaugural class — being the first and Handy, who took over the program 17 years ago, the third.

In his first two seasons as assistant coach, in 1994-95, Liberty wasn't playing a full schedule. The following year there was no hockey program.

"Historically, so much of Liberty Hockey can be traced back to him," said Rasty McGibbon, Puglisi's presenter for Friday's ceremony. Puglisi added McGibbon to his staff as an assistant in the late 1990s, handing over the duties to him and current DI women's Head Coach Paul Bloomfield when he left. "I don't think it's a mistake that all three coaches of the men's program (Division I — Handy, DII — Chris Lowes, and DIII — Rett McGibbon, Rasty's brother) are here because of Corrado. Their route to Liberty was through him. The fingerprint that he has left on hockey here is pretty incredible."

"I remember getting a call from a couple of the guys who asked me if I wanted to be the head coach," Puglisi recalled. "I had meetings with players and wanted to know what the expectations were. I thought it was odd that I was being interviewed by players. I said, ‘If you want me to lead this team, I'm going to run it.'"

As a 26-year-old undergraduate student, Puglisi, who grew up playing and later helping to coach high school hockey in Toronto, took over the team from interim coach Chris Holchaf.

Puglisi quickly revived the program, getting the Flames into a conference, the ACCHA, and winning the tournament championship in their first season.

"We had to raise our own money to rent ice (at the Roanoke Civic Center) for practices once or twice per week and games twice a week against ACCHA (members) Virginia Tech, Radford, Duke, North Carolina, NC State, VCU, and the University of Virginia," he said.

Liberty had to share ice time with Radford and Virginia Tech in Roanoke and traveled there as well as down to North Carolina and up to UVA to play games.

Students caught onto the new hockey craze, with a loyal and extremely vocal following helping to fan the Flames' success on the ice.

"It was just exciting. I totally loved it," Puglisi said. "There were a lot of connections between the fans and the players. They loved hockey, the grinding games with occasional fights."

The team gave students a reason and excuse to extend curfew and travel off campus for weekend contests.

"We would get about 800 fans who were willing to drive an hour out to the Roanoke Civic Center and back and pay $5 per ticket to enjoy a good hockey game and be fully entertained," Puglisi said. "They could stay out late since their ticket to the hockey game was their (late-night) pass," to give to their dorm's resident assistant.

As the 1997 regular season came to a close, the Flames gave their fans more to cheer about in the ACCHA tournament.

With Corey Walyuchow — who was inducted into the Club Sports Hall of Fame's second class last year — in goal, fourth-seeded Liberty edged top-seeded, arch rival Virginia, 7-6 in overtime, for a major upset in Charlottesville, with at least as many Liberty as UVA faithful in attendance.

"The semifinal game felt like the final because we felt that they were the strongest team in the league," Puglisi said. "It was incredible to see our fans, who drove 90 minutes, packed into the Charlottesville Ice Park alongside the local UVA fans. Because our fans that got back to Lynchburg at 2 or 3 a.m. didn't come back the next day, we hardly had anybody there for the championship game (a 4-2 win over UNC). Even though it was anti-climactic compared to the previous win, it was still an incredible way to end it and a hard-fought victory."

That set the stage for the team to expand and improve with incoming recruits rather than relying on on-campus tryouts and walk-ons.

When he took the coaching reins, Puglisi was already married to his wife, Melissa, from Martinsville, Va. Both completed their studies at Liberty and are currently teaching in Newmarket, Ontario. Puglisi continues to be involved in hockey and considers it a blessing to coach his two teenage sons, Chris and Daniel.