Flames look to induce 'Mayhem' in midnight opener vs. IUP 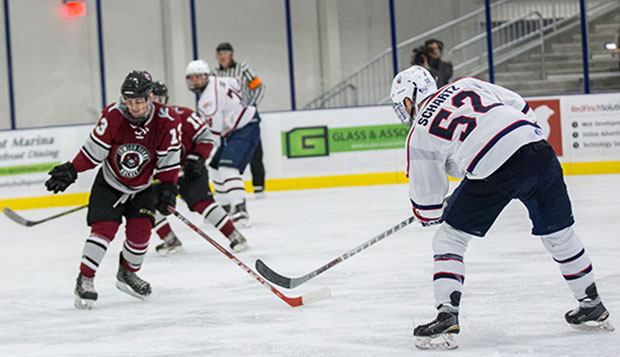 Liberty sophomore defenseman Zane Schartz, the Flames' second-leading scorer this season, launches a shot against IUP in an 8-1 win at the LaHaye Ice Center last Dec. 11.

With the pressure of next week's final exams looming, Liberty University's ACHA Division I men's hockey team offers students an exciting study break at Friday's second "Midnight Mayhem" matchup of the semester, with the puck set to drop at 11:59 p.m. for a faceoff against Indiana University of Pennsylvania.

The Flames hope to open an early lead on the Crimson Hawks to help relieve any excess stress on the ice and build some momentum heading into the Christmas break. Saturday's 7 p.m. rematch with IUP will be Liberty's last contest of the semester before traveling to New York soon after the New Year to challenge ESCHL rival Stony Brook Jan. 7-8.

If Liberty can open an early lead on the Crimson Hawks, it will try to avoid letting it slip away after allowing Rutgers to score the last five goals in Sunday's 5-3 collapse in New Jersey. That prevented the Flames from completing a three-game weekend sweep on the road and extending their winning streak to five games.

Liberty is 1-1 in midnight matchups over the past two seasons and wound up splitting both series against Delaware and Alabama after  Saturday's encores. Backed by a capacity crowd on Nov. 14, 2015, the Flames edged the Blue Hens, 3-2, in their first "Midnight Mayhem" experience. They had a bit of an emotional letdown in the rematch the following evening, however, allowing their favored guests to salvage a split with a 4-2 win played in front of a much smaller fan base.

This fall, after suffering a 7-5 setback to Alabama in a back-and-forth battle early on the morning of Oct. 1, Liberty rolled over the Crimson Tide in the rematch played just over 12 hours later, 11-2.

This weekend, after offering students discounted $2 tickets for the midnight showdown with the Crimson Hawks, Saturday will be a Faculty and Staff Night.

Liberty scouting report: The Flames, who started the season 8-1, have won four of their last five games after dropping five of their previous seven. They have already eclipsed last season's win total with a half of a semester of hockey still to play before the March 9-19 ACHA National Championships. In their first series meeting in at least 10 years, the Flames dominated IUP last season at home, sweeping the Crimson Hawks by 8-1 and 7-3 scores Dec. 10-11 to move above the .500 mark heading into the Christmas break with their fifth and sixth consecutive victories.

In goal, sophomore Blake Scott has had the hot hand of late, going 6-2 with a 3.01 goals-against average and 87.4 save percentage while senior Matt Pinel has earned more starts, sporting a 5-5 record with a 3.60 GAA and 89.6 SP.

IUP scouting report: Like the Flames, who welcomed 15 newcomers this fall, the Crimson Hawks feature plenty of fresh talent. Their offense is sparked by forward Reid Duguid (14G, 10A), who leads the team with four power-play goals and three game-winning scores. Defenseman Trevor Mack (4G, 10A) ranks second in scoring and has netted two game-winning goals while left wing Brendan George (7G, 3A) is IUP's only other double-digit scorer with 10 points.

Between the pipes, Robert Stock has logged the majority of minutes for the Crimson Hawks, sporting a respectable 3.79 GAA and 89.9 SP.